Court issues TRO against Labella’s termination of MCWD board 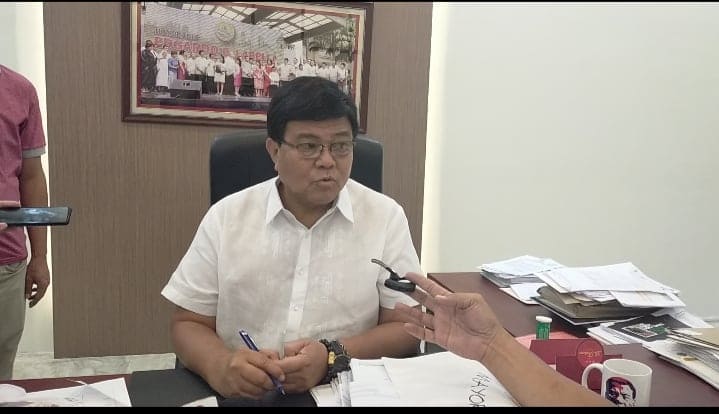 Cebu City Mayor Edgardo Labella reiterates that he has the authority to fire members of the Metro Cebu Water District (MCWD) board of directors.| Irene R. Sino Cruz

CEBU CITY, Philippines — More than a year after the controversial termination of the board of directors of the Metropolitan Cebu Water District (MCWD) by Mayor Edgardo Labella, the court has issued a temporary restraining order (TRO) over the termination.

The Regional Trial Court Branch 7 has issued a restraining order over the October 2019 decision of Labella to unilaterally depose the board of directors for loss of confidence over their alleged failure to solve the water crisis especially during the peak of the 2019 El Niño.

The order was penned by Honorable Judge James Steward Himalaloan on March 15, 2021, with orders to reinstate the terminated board within the next 20 days of the TRO’s validity and that “the present Board of Directors of the Metropolitan Cebu Water District (MCWD) shall be restrained and shall cease and desist in the exercise of their functions, duties, and responsibilities within the 20-day period duration.”

It can be recalled that all five members of the board including Joel Mari Yu (chairman), Ralph Sevilla (vice-chairman), Cecilia Adlawan (secretary), Procopio Fernandez (member), and Augustus Pe (member) were replaced by Labella’s own appointees.

The new board is chaired by Lawyer Jose Daluz III with members and other officers including Miguelito “Mike” Pato, Francisco “Frank” Malilong Jr., and Manolette Dinsay.

Of the five terminated board members, Ralph Sevilla, Cecilia Adlawan, and Augustus Pe went to court to contest the termination saying that Labella may have the authority to appoint members of the board with Cebu City having the most shares in the utility, but the mayor had no authority to terminate them.

The three board members also filed charges against the Local Water Utility Association (LWUA) for placing an “illegal” interim board during their termination.

Lawyer Amando Virgil Ligutan, the legal counsel of the three board members, said in a press conference that the decision of the court shows that the court is in the opinion that there is ground to believe that it was “illegal” for the part of the city mayor to remove the directors.

“This is a big victory not only for the plaintiff but also for those who believe in the rule of law. The law is clear, the city mayor cannot remove members of the board. It is clearly stated in PD 198 that water districts like MCWD once created should not be under the local government in particular, the city mayor.”

“In effect, Sevilla, Pe, and Adlawan are back in MCWD,” said Ligutan.

Two hearings are set before the end of the TRO’s 20-day period first on March 18, 2021, for the presentation of evidence on why the preliminary injunction should be granted and on March 25, 2021, for the defendants to show cause on why it should not be granted.

The camp of the three directors is hoping that the TRO will be extended and the court will find sufficient grounds to go on trial.

“This TRO sets things right. That was the first time that a city mayor tried to exercise jurisdiction over a water utility when the DILG (Department of Interior and Local Government) has been consistent and clear all throughout that what the mayor can do is only up to the appointment of the members of the board. After that, the mayor cannot touch the members of the board,” said Ligutan.

Mayor Labella for his part said he has yet to receive the order of the court and said should it arrive, it will be referred to the City Legal Office for the filing of a motion for reconsideration.

“We will file a motion for reconsideration. I will be the one to guide the City Attorney on what to point out in the motion for reconsideration. Anyway, we have 20 days, we will take the appropriate actions. It should have been issued earlier rather than much later because the new board has been appointed and recognized by the LWUA,” said Labella in a phone interview.

The mayor said the city government will be given a chance to appeal through a motion for reconsideration and the court will then decide whether to grant this motion or not.

Until the motion for reconsideration has been filed and decided upon, Labella said the reinstatement of the previous board will stand in limbo.

For now, Labella trusts that the court will see their arguments in the motion for reconsideration and lift the TRO against his termination order.

CDN Digital has tried to reach MCWD Chairman Jose Daluz III, but as of the time of writing, the chairman has not responded to queries yet. /rcg