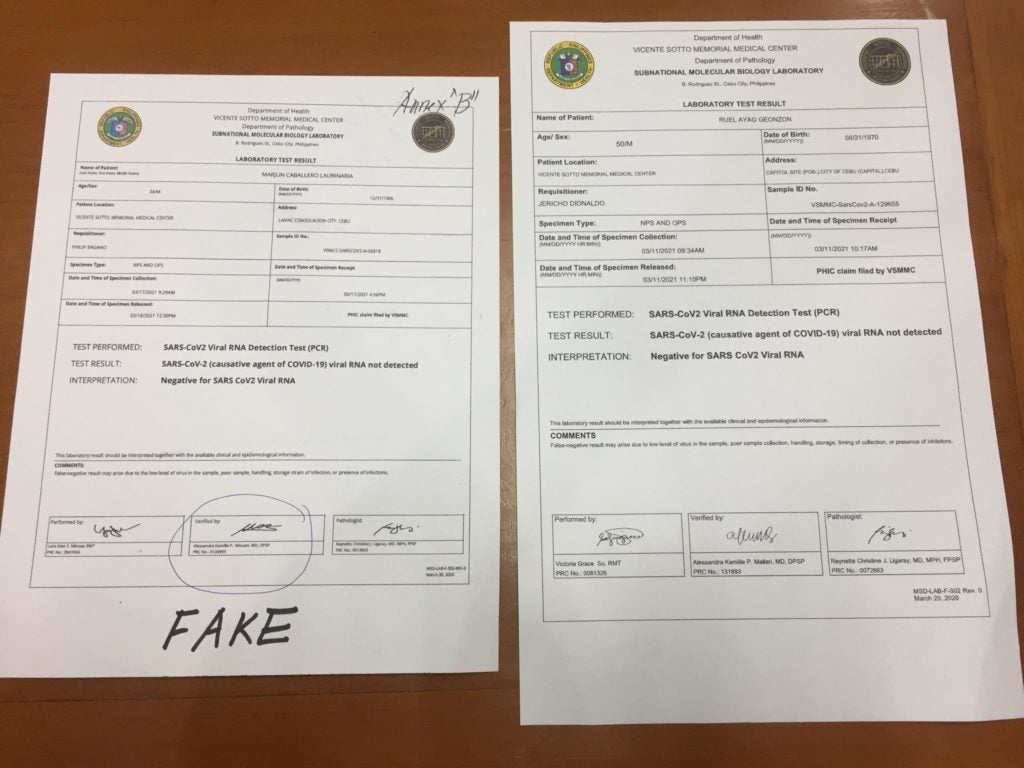 CEBU CITY, Philippines — A tip from the mayor of Bohol town about the rampant selling of falsified real-time reverse transcription polymerase chain (RT-PCR) results or fake RT-PCR results at P1,500 each in Cebu City ports led to the arrest of two men on Thursday, March 18.

“We received an information coming from the mayor of San Miguel, Bohol, in the person of Attorney Virgilio Mendez. According to him, there is a widespread selling of falsified RT-PCR test (results) at the ports of Cebu,” said Director Renan Oliva, National Bureau of Investigation in Central Visayas chief, during a press briefing on March 19.

Oliva said that they sent a team to two Cebu City ports — Pier 1 and Pier 3 — to verify if the information was true.

He said the team of three agents confirmed the selling of fake RT-PCR results.

(Acting on the complaint, we conducted a surveillance particularly to ports going to Tagbilaran and Tubigon Bohol in Pier 1 and Pier 3. The information was true. It was verified that there are falsified RT-PCR results sold for P1500.)

With the confirmation of the information, Oliva and his team then conducted an entrapment operation that led to the arrest of the middleman – Rogelio Nebres – and the owner of the shop where the document would be made — Rakim Sultan Busara.

Oliva said that Nebres would offer the services for a fee — the RT-PCR test results without getting swabbed for P1,500.

He said that a P500 downpayment was required for the transaction to proceed.

He also said that after Nebres, who negotiated with on of the NBI-7 undercover agents, was arrested at Pier 1.

Nebres then led the NBI-7 team to a building in Colon Street in downtown Cebu City where Busara’s shop or office was and where the fake document was made.

Oliva said that they moved in and arrested Busara when the document was done after an hour and the balance of P1,000 payment changed hands.

He also said that Nebres and Busara claimed that they had been doing the illegal business for nearly a year and even at the peak of the pandemic here.

Oliva said that they were investigating other reports of other groups doing this same kind of illegal business in Cebu City and Cebu Province.

He said like for example, in San Miguel town in Bohol, if they would be caught with these fake documents there, then they could be charged with falsification of public documents and use of falsified documents.

He also said that it would be safer to just really get your RT-PCR results through the proper way or the proper channels.

He said they could get themselves swabbed for free at Vicente Sotto Memorial Medical Center, although the RT-PCR results would only be available to them at least two days later.

Meanwhile, the suspects, Nebres and Busara, were detained at the NBI-7 detention cell at the Capitol Site.

They will be charged with estafa through falsification of public document and for violation of the Cybercrime Prevention Act of 2012.

Transport groups in Cebu to President Duterte: Thank you for helping us