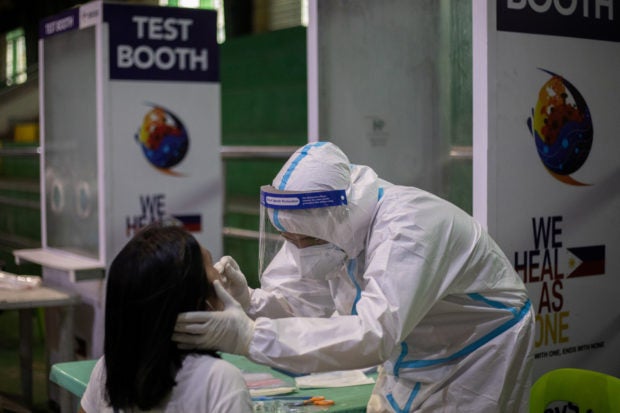 FILE PHOTO: A health worker conducts coronavirus disease (COVID-19) swab testing at a gymnasium in Navotas City, Metro Manila, Philippines. The country has been ranked second to the lowest among 53 countries in terms of COVID-19 resilience according to Bloomberg. REUTERS/Eloisa Lopez

MANILA, Philippines — The Philippines has ranked 52nd out of 53 economies in a global study that measures the resilience of countries to the COVID-19 pandemic.

Based on Bloomberg’s COVID Resilience Ranking published on Tuesday, the Philippines ranked second to the lowest with a score of only 45.3, next to Argentina with a score of 37, based on latest data as of June 27.

The indicators considered in the study are the percentage of people who have been vaccinated, severity of lockdowns, flight capacity, vaccinated travel routes, one-month cases per 100,000 population, one-month case fatality rate, total deaths per 1 million people, and positivity rate.

Topping the ranking are the United States with a high resiliency score of 76, New Zealand with 73.7, Switzerland and Israel with 72.9, and France with 72.8.

Bloomberg said the latest study introduces a new element in the ranking—reopening progress—which measures the ease of moving in and out of a place and the recovery of air travel.

As of Tuesday, the Philippines has already recorded a total of 1.4 million confirmed COVID-19 cases, composed of 50,037 active cases, 1.3 million recoveries, and 24,557 deaths. There were additional 4,479 new infections logged on Tuesday.

The country has administered a total of 10 million vaccine doses, including 7.5 million provided as first jabs. Over 2.5 million individuals have been fully vaccinated as of June 27.

Read Next
Donaire calls off fight with Casimero