MANILA, Philippines—It started with a bottle of Coke.

Carlo Paalam was just a thin nine-year-old when he chanced upon a neighbor setting up boxing exercises.

After hearing mass in Cagayan de Oro, Paalam was enticed to try boxing when his neighbor told him to just spar with his son and the winner would get a bottle of Coke.

Now, Paalam is on his way to the Olympics for a chance to give the country an elusive gold medal.

“It was after church then when I got home I saw my neighbor, who was a boxer, boxing and training his son,” said Paalam in Filipino. “He then called me to come over that I should spar with his son.”

“I was scared because the kid was the son of a boxer and he was good. I didn’t want to spar with him but my neighbor gave me a pair of gloves and he told me that whoever wins gets a bottle of Coke. Of course, I was only a nine-year-old kid so I said I’ll do it. I was gonna get some Coke.”

A product of a broken family, Paalam had to scavenge his ways to meals walking around town to pick up bottles and plastics and trade them in for some change.

Boxing, he saw, gave him a way out. 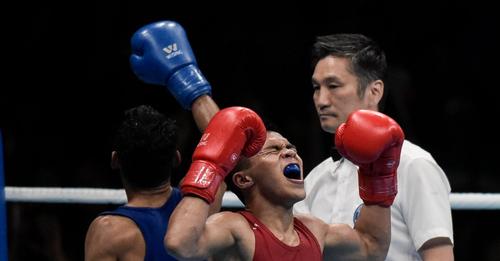 “My neighbor saw that I had guts inside the ring even though I had blood running down my face,” said Paalam. “When I train and fight, whatever prize I get I give to my parents.”

Paalam had his first taste of organized competition in Cagayan de Oro’s Boxing in the Park which is held every Sunday at the town plaza.

It was in these amateur events that Paalam decided that he would ditch scavenging and focus on boxing as he could earn P120 in just a few minutes instead of walking for hours for scraps.

“My journey started at the Boxing in the Park every Sunday and there was a P120 prize so that’s a big deal for me because instead of scavenging for hours finding bottles and plastic, here I can just have fight then I can get money win or lose,” said Paalam. “It was there that I was able to show my talent and coach Elmer Pamisa was able to recruit me.”

“He was really a dad to me, he really took care of me.”

‘BOXING IS MY LIFE’

Paalam would then become a bronze medalist in the 2018 Asian Games and a gold medal winner in the 2019 Southeast Asian Games.

His accolades in the regional and continental level allowed him to accumulate enough points that qualified him for the 2020 Tokyo Olympics after the AIBA Boxing Olympic Qualifying Tournament was canceled due to COVID-19.

“I never stopped boxing, from the start I knew I had to keep going,” said Paalam. “I am thankful for the sport because if not for this I wouldn’t be able to help my family, myself, my siblings and my relatives.”

“Boxing is a huge part of my life and it will always remind me where I came from. It was because of the sport that I can wear the clothes I’ve only dreamt of wearing before. This really is a blessing from God. Nothing is impossible for anyone who dreams big.”

Read Next
Gwen set to be vaccinated soon