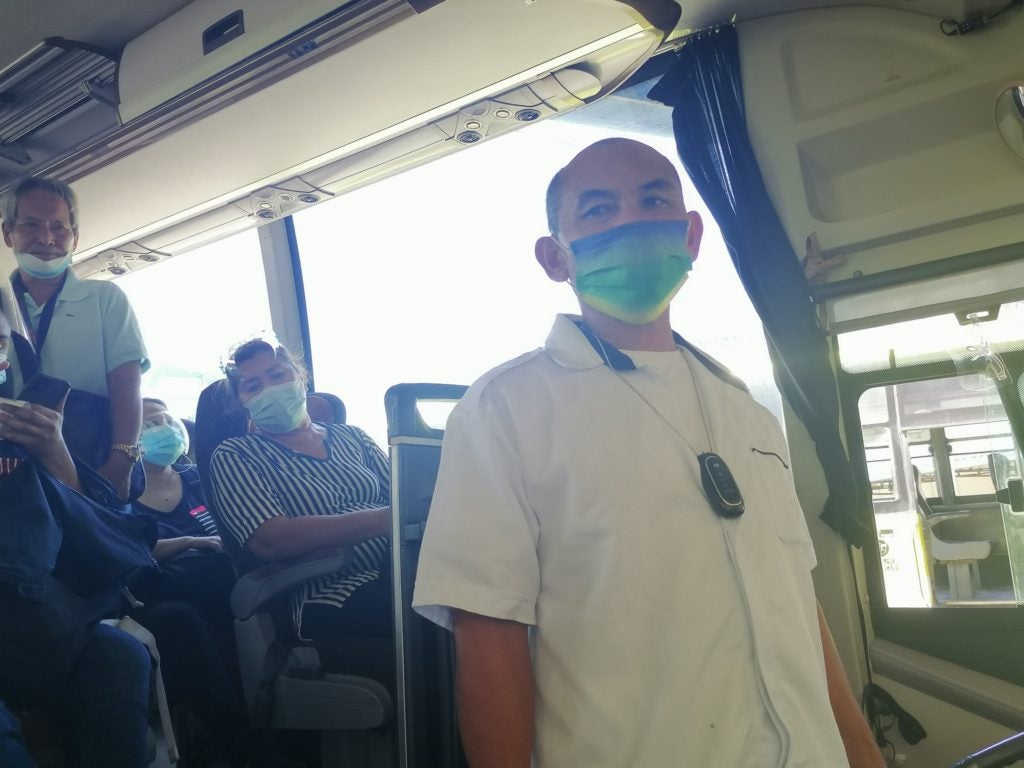 LOOK: 47-year-old Richard Benitez, a bus driver for over 15 years, wears an air purifier around his neck. Benitez said he borrowed some money from a friend to purchase the air purifier that costs P2,000. | CDN Digital File Photo by Morexette Marie Erram

CEBU CITY, Philippines – Before driving a public utility bus for more than five hours, from Cebu City to Dumaguete City, on Monday, August 16, 2021, Richard Benitez had to borrow money from one of his friends.

Benitez, 47, used the funds in purchasing a wearable air purifier. It costs P2,000, he said, and was the only one immediately available.

“It was also sold to me by a friend since I had a hard time looking for cheaper ones,” said Benitez in Cebuano.

“I decided to buy one after learning that drivers and conductors of buses in Cebu province will have to wear one starting August 16,” he added.

The Capitol’s memorandum mandating the use of air purifiers in public utility vehicles (PUVs) took effect on Monday when Benitez was bound for Dumaguete.

However, it was short-lived as the provincial government retracted its implementation.

This is to give operators, drivers, and conductors more time to purchase the air purifiers, according to Quijano.

All parties reached an agreement to adopt an ‘open-air’ concept if it meant minimizing the transmission of COVID-19 in vehicles with poor ventilation.

But the provincial government’s decision to require air purifiers drew flak among netizens, and transport groups such as PISTON-Cebu.

According to other bus drivers reporters interviewed on Monday at CSBT, the move also resulted in passengers in several parts in Cebu enduring long waiting time to board any PUV as some operators reportedly did not proceed with their trips, for fear they will get apprehended for non-compliance.

“That’s why the governor decided to extend the implementation so the other operators can buy for themselves, their drivers and conductors,” Quijano explained.

Meanwhile, the Department of Health (DOH) on Monday responded on the matter by saying handy air purifiers worn around the neck cannot provide protection against COVID-19 and will only provide a false sense of security.

Vergeire was referring to an advisory their bureau issued last October 2020, in which they disputed the effectiveness of air purifiers as protection against COVID-19.

Loreche pointed out that while air purifiers can be considered as ‘enhancements’ against COVID-19, however, these should not be treated as alternatives in preventing the spread of the virus.

“Suffice to say that these technologies should be an enhancement only and to never replace the most consistent and proven effective way of controlling the transmission of COVID-19 -proper wear of face masks, hugas kamay, iwas sa mga matataong lugar and stay at home,” said Loreche.

Cebu province’s ‘General Community Quarantine (GCQ) with heightened restrictions’ has been extended until August 31 as infections continue to rise.

But at least 11 localities were elevated to a stricter Modified Enhanced Community Quarantine (MECQ) for having high numbers of active cases of COVID-19.

Mandatory use of air purifiers in Cebu province postponed