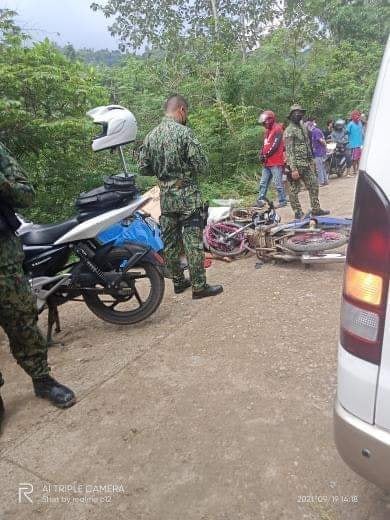 Traffic policemen from the Mabolo Police Station assess the accident scene where five minors were involved in a three motorcycle collision in the mountain barangay of Bonbon, Cebu City on Sunday afternoon (Sept. 19). | Contributed photo via Paul Lauro

CEBU CITY, Philipppines — Five minors, 4 boys and a girl, whose ages range from 12 to 17, were involved in a deadly three-motorcycle collision in a mountain barangay in Cebu City on Sunday, Sept. 19.

The three-motorcycle collision in Sitio Camarin, Barangay Bonbon in Cebu City at past 1 p.m. on Sunday, Sept. 19, caused the death of one of the motorcycle drivers, a 17-year-old boy, whom police identified as Rafael.

Police Staff Sergeant Jacinto Arnado Jr., investigator of the Mabolo Police Station, said that two other boys Junrey 17, and Jundel, 16, were admitted at a hospital in the city for treatment of their injuries in the crash.

Joy, 15, who drove one of the motorcycles, and 12-year-old Carl, who was the backrider of Rafael, were slightly hurt in the crash.

Arnado said that all those minors involved in the crash were not wearing helmets or any protective gear.

Investigation showed that Joy, who was on an errand at past 1 p.m. that day, was cruising along the road in Sitio Camarin on her motorcycle when she noticed Rafael with Carl on their motorcycle driving at high speed behind her.

When she saw how fast they were driving, Joy said that she stopped her motorcycle to let them pass.

She said that she and Rafael were heading in the same direction away from the city proper of Cebu City.

Rafael’s sudden swerve to the left caused him to collide head on with Junrey’s motorcycle.

The impact of the collision caused the drivers and their backriders to be thrown from their motorcycles to the pavement.

Aside from that, the impact also caused Rafael’s motorcycle to hit Joy’s motorcycle causing her to fall down from her motorcycle.

Arnado said being minors, the three motorcycle drivers, had no driver’s licenses and they should not have been allowed to drive at all.

With this, Arnado reminded parents, especially those living in mountain barangays, to not allow their minor children or children without any driver’s license not to drive motorcycles.

(Parents should not allow their minor children, who have no SP [student driver permit] or driver’s license to drive their motorcycle.)

(We should avoid allowing them to drive even if you live in the mountain barangay especially if accidents have happened there. We should prevent them from driving because these children are prone to accidents because they do not know the traffic laws.)

He said in four years of serving as a traffic policeman, he had not encountered an accident such as this.

He also said that the area where the accident happened was not an accident-prone area.

Arnado said that Barangay Bonbon was one of the barangays under the jurisdiction of the Mabolo Police Station.

Barangay Bonbon is a mountain barangay west of Cebu City, which is at least 16 kilometers west of Barangay Mabolo, a city barangay in Cebu City.