Pulse Asia: Approval score of Duterte admin in fighting corruption down by 12% 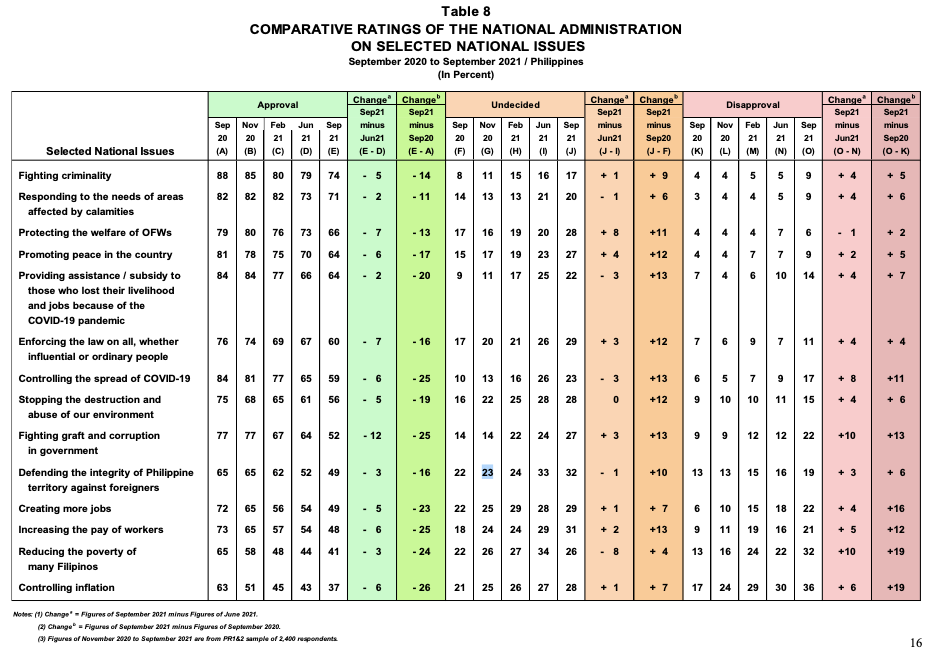 MANILA, Philippines — Approval scores for the Duterte administration’s handling of some national issues have decreased, with the biggest jump recorded in its efforts to fight graft and corruption, based on the latest survey of Pulse Asia released on Tuesday.

According to the survey, the approval score of the government in fighting graft and corruption decreased by 12 percent, from the previous 64 percent in June to 52 percent in September.

Approval scores for the administration’s handling of nine other issues also eased down, according to Pulse Asia.

The Duterte government’s approval score for handling criminality decreased from 79 percent in June to 74 percent in September; creating more jobs from 54 percent to 49 percent; preventing environmental destruction from 61 to 56 percent, and promoting peace from 70 to 64 percent.

The administration’s approval rating for handling COVID-19 pandemic likewise dipped from 65 to 59 percent; workers’ pay from 54 to 48 percent; inflation from 43 to 37 percent; the welfare of overseas Filipino workers (OFWs) from 73 to 66 percent; equal enforcement of the law from 67 to 60 percent.

Meanwhile, the disapproval scores of the Duterte administration on some national issues have increased.

According to the survey, the disapproval score of the national administration on its efforts to fight graft and corruption increased from 12 percent in June to 22 percent in September, or an increase of 10 percentage points. Meanwhile, the disapproval for the government’s initiatives to reduce poverty increased from the previous 22 to 32 percent—also a leap of 10 percent.

However, Pulse Asia noted that “for the most part, public assessment of the work done by the national administration remains positive” and that “significant changes occur in the latter’s performance ratings not only between June 2021 and September 2021 but also year-on-year.”

The polling firm further noted that indecision toward the Duterte administration’s efforts to protect the welfare of OFWs “becomes more manifest” from June to September with an increase of eight percentage points, but eases in connection with its initiatives to reduce poverty with negative eight percentage points.

Despite the decrease in percentage, Pulse Asia noted that scores for the works of the national administration remain to be positive figures.

According to the company, the national administration enjoys majority of approval ratings for its handling of nine issues, such as fighting criminality at 74 percent; responding to the needs of calamity-hit areas at 71 percent; protecting the welfare of OFWs at 66 percent; promoting peace in the country at 64 percent; providing assistance to those who lost their job or source of livelihood due to the pandemic at 64 percent; enforcing the rule of law at 60 percent; controlling the spread of COVID-19 at 59 percent; stopping environmental destruction at 56 percent; and fighting corruption at 52 percent.

The polling firm added that the Duterte administration registers “practically the same” approval and disapproval ratings for its initiatives to control inflation at 37 percent versus 36 percent, respectively.

According to Pulse Asia, Filipinos are most critical of the Duterte administration’s work in reducing poverty at 32 percent and controlling inflation at 36 percent. They are “least inclined to disapprove” of the government’s efforts to protect the welfare of OFWs at six percent, fight criminality, respond to the needs of calamity-hit areas, and promoting peace, all at nine percent.

Meanwhile, levels of indecision toward the work done by the national administration range from 17 percent on criminality to 32 percent on national territorial integrity.

Pulse Asia conducted the survey from September 6 to 11 with 2,400 respondents aged 18 and above from Metro Manila, the rest of Luzon, Visayas, and Mindanao, and with a ± 2% error margin.