Existentialist threat to the Senate 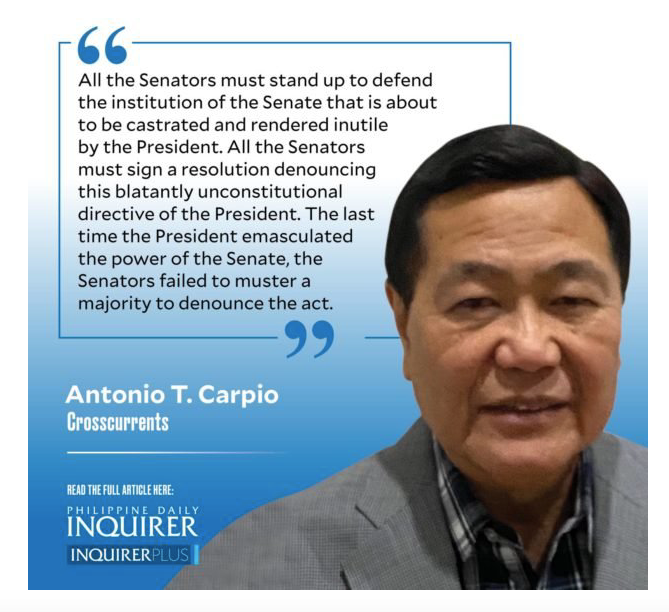 Congress exists to enact laws. Congress cannot intelligently enact laws unless it has timely and accurate information from the departments and agencies of the Executive branch. To secure such timely and accurate information, the Constitution has empowered both the Senate and the House of Representatives to conduct inquiries in aid of legislation. Thus, the Constitution provides: “The Senate or the House of Representatives or any of its respective committees may conduct inquiries in aid of legislation in accordance with its duly published rules of procedure.”

In Senate v. Ermita, the Court held that the only ground that the President can invoke in barring his Cabinet members and executive officials from attending Senate inquiries in aid of legislation is “executive privilege.” This sole ground may be invoked if the subject of the inquiry refers to matters involving national security, military or diplomatic secrets, or to conversations and correspondences between the President and his Cabinet members or executive officials. Obviously, the ongoing Pharmally inquiry does not involve any of these matters which may be the basis to claim “executive privilege.” The purchase price, quality, and delivery of face masks and face shields, which are not the subject of conversations or correspondences with the President, cannot constitute “executive privilege.”

Clearly, the President’s directive is brazenly unconstitutional on its face. The Senate is now faced with an existentialist threat that would prevent it from discharging its basic function—to enact laws. If the Senate cannot compel Cabinet members and executive officials to attend its inquiry, then it would be enacting laws blindly, without accurate information as to the problems of the nation and the causes of such problems. Naturally, without such information, the Senate cannot intelligently enact laws to address the problems of the nation. The President’s directive will effectively make the Senate, and also the House of Representatives, completely inutile.

Several universities, school alumni organizations, law associations, business groups, and political parties have denounced the President’s directive as unconstitutional, even pointing out that if the President has nothing to hide then he should not obstruct the Pharmally inquiry. All the senators should do no less and demand that the President withdraw his unconstitutional directive. This is their minimum obligation to the institution they serve.

The nation is now watching a grotesque situation where the President of the Republic has escalated into a constitutional crisis his defense of the Pharmally transactions.