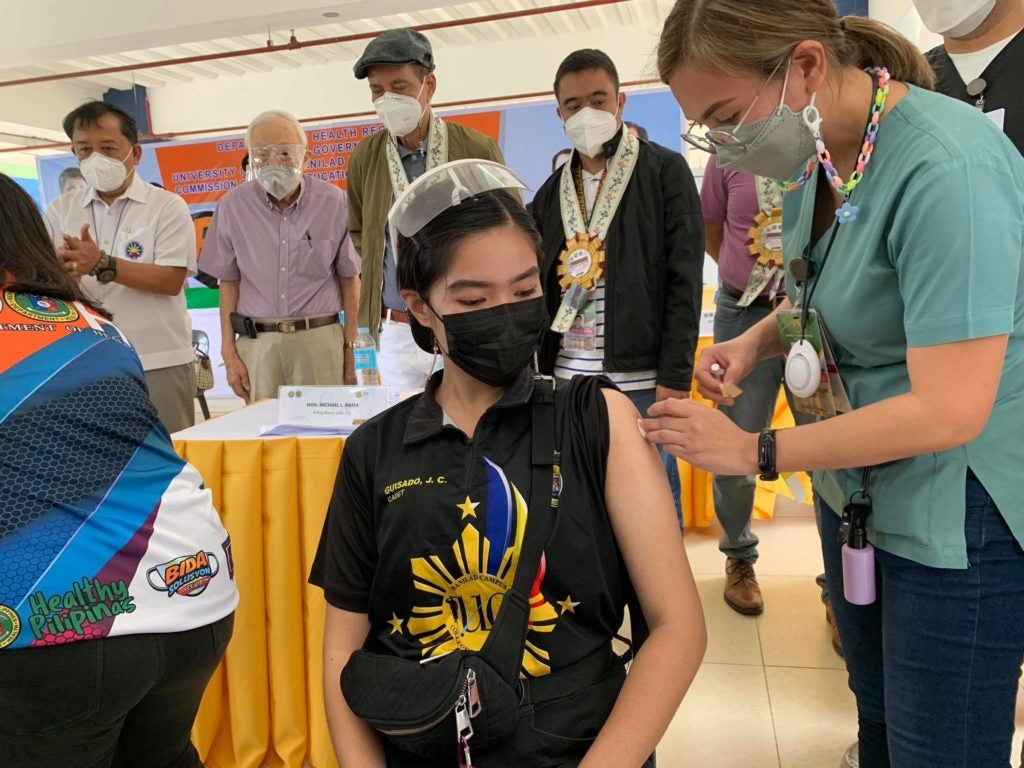 One of the college students of higher education institutions in Cebu City gets vaccinated in one of the city’s vaccination sites. | Dyrecka Letigio

The health official was reacting to remarks a day earlier by Secretary Carlito Galvez Jr., chief implementer of the National Task Force Against COVID-19 (NTF), who said a vaccine mandate in the form of an executive order may be necessary to ensure the protection of inoculated families.

“Now [this is] one of the things we are looking at because we will never achieve the immunity needed by our population if there are still sectors of society that remain unvaccinated,” Vergeire said.

“One of the ways we can do this is to make it mandatory,” she said during a press briefing.

This was a departure from her statement in April when she said that it was “the right of a person to decide on his own if he shall receive or will not receive the vaccine,” citing “principles that we adhere to” and the recommendation of the World Health Organization (WHO) that vaccination should be voluntary.

But she also said that people had the “moral obligation” to protect themselves, their families and communities, and the “whole population” against COVID-19. Vergeire added, however, that vaccination could not yet be mandated because the vaccines then were at the “developmental stage.”

According to the WHO, herd immunity is the “indirect protection” against an infectious disease that happens when people become immune either through vaccination or natural immunity developed after a previous infection.

The Philippine government is targeting 70 percent of the country’s 110 million population for inoculation to achieve herd immunity. The WHO said the proportion of population to be vaccinated for herd immunity against COVID-19 is not yet known. Some experts are saying this may have to be bigger because new variants of the coronavirus are emerging that are more resistant to vaccines.

During Friday’s press briefing, Vergeire said the country’s vaccine supplies were continuing to come in and vaccine confidence had “tremendously improved.” But due to fears of adverse reaction to the jabs and brand preference some sectors are still hesitant to get the shots and this was affecting the government’s efforts to speed up the inoculations, she said.

A Sept. 27 to Sept. 30 survey by the Social Weather Stations found three in five adult Filipinos, or 64 percent, saying they were willing to get vaccinated, up from 55 percent in June and 32 percent in May.

29M out of 77M
A total of 62,474,334 shots have been administered out of the 108,912,460 doses that have arrived in the country as of Nov. 4. The government has already used other means to boost jab acceptance, especially in the provinces through information drives, incentives, and house-to-house vaccination, Vergeire said. But it wants to “push its campaign forward” to achieve herd immunity sooner, she said.

As of Thursday, only about 28.7 million have been fully vaccinated out of the 77 million targeted for herd immunity in the country.

In Metro Manila, 88.86 percent have been fully vaccinated.

The government wants to fully vaccinate at least 50 million Filipinos by the end of the year, according to presidential spokesperson Harry Roque.

“If we continue to vaccinate almost one million a day, we will be able to reach our target of population protection in December. Keep up the good work, Philippines,” Roque said at a press briefing4Ps beneficiaries

Galvez had said that beneficiaries of the Pantawid Pamilyang Pilipino Program (4Ps), who belong to the A5 group, or indigents, would be among the targets of a vaccine mandate.

Based on the Nov. 4 data from the national COVID-19 vaccination dashboard, only 25.4 percent, or 3.27 million, of the A5 group are fully vaccinated.

The same data showed 58.7 percent of the elderly, or 4.85 million, had completed their doses against COVID-19.

An infectious disease expert was concerned that only a little over half of seniors nationwide had been fully vaccinated. He noted that this age group had the highest morbidity and mortality, and would have a more severe disease.

Dr. Benjamin Co of the University of Santo Tomas Hospital told the Inquirer that the elderly “should always be the priority” for inoculation and the government should aim to vaccinate 80 percent to 100 percent of this age group.

After starting the inoculation of minors aged 12 to 17 the government may soon administer booster shots or third doses of the COVID-19 vaccine.

FDA reviewing boosters
Food and Drug Administration (FDA) Director-General Eric Domingo on Friday said a review of the administration of an extra dose, including all possible combinations of the vaccines, may be completed in about two weeks.

He said the administration of an extra dose may start this month to a “very selected group”—the healthcare workers, the immunocompromised, and the people at risk of getting severe COVID.

Domingo said vaccine manufacturers would have to apply for a new emergency use authorization (EUA) for vaccines for those below 12 years old.

He expects Pfizer, which was recently authorized to use its vaccines on young American children, to apply for an amendment to its EUA this month to allow the use of its COVID-19 vaccine on children 5 to 11 years old, Domingo said. —WITH REPORTS FROM LEILA B. SALAVERRIA AND INQUIRER RESEARCH