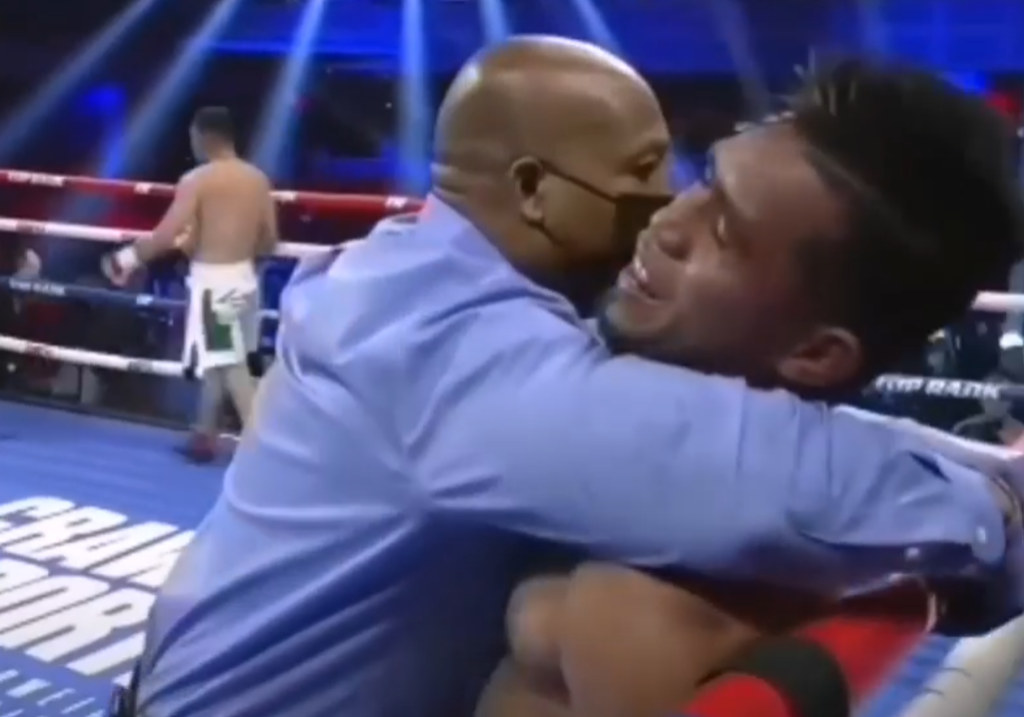 The bout’s referee embraces Filipino boxer Mark Bernaldez after the former stopped the fight in the third round. | Screen grab during the fight’s live streaming.

This as the Butuan City native lost to a technical knockout against Cortes in the third round of their short-lived nail-biting see-saw battle.

The bout was stopped at the 2:12 mark of the third round after the referee all of a sudden jumped right in front of the two boxers as Bernaldez was defending while being pinned on the ropes as Cortes unleashed a flurry of combinations.

Before that, Bernaldez got hit with a counter right overhand that wobbled him and forced him to up his guard against Cortes.

With the TKO, Bernaldez suffered his fifth defeat with 23 wins and 17 knockouts and ultimately snapping his three fight winning streak.

(It’s a wasted opportunity because I can still fight. What hurt was it was quickly stopped.)

Despite the loss, Bernaldez, who fights under Sanman Promotions, managed to hit Cortes with numerous heavy blows in both the first and second rounds.

Bernaldez was the more aggressive between Cortes in the first two rounds by launching combinations to the head and body.

He even pinned Cortes to the ropes in the first round and had nice exchanges with the latter.

It was until the third round when Bernaldez got hit with a left hook while moving backwards. Cortes sensing a knockout, unleashed a combination that pinned Bernaldez on the ropes.

Bernaldez tried to recover by countering Cortes with a short right, but the latter answered him with more combinations that forced the referee to stop the bout.

With the victory, Cortes remained unbeaten and improved to 16 wins with nine knockouts. Bernaldez was the second Filipino that Cortes defeated.

Last August 14, he finished off ex-world title challenger Genesis Servania in the first round in Tulsa, Oklahoma.