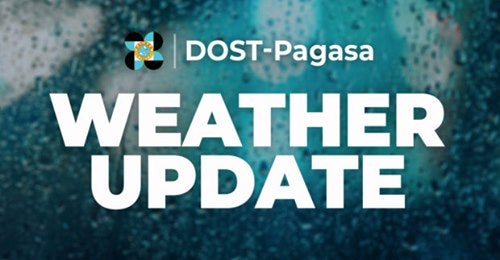 MANILA, Philippines — Expect a cloudy, rainy Wednesday (December 29, 2021) in parts of the Visayas and Mindanao due to the shear line while rain showers are likewise expected in Luzon due to the surge of the northeast monsoon or “amihan,” according to the Philippine Atmospheric, Geophysical, and Astronomical Services Administration (Pagasa).

(This convergence of winds causes clouds that bring heavy rain. This will affect a large portion of the Visayas and the northeastern portion of Mindanao.)

Based on Pagasa’s forecast, Visayas, Mindanao, and Palawan will experience cloudy skies with scattered rain showers and thunderstorms due to the shear line and the intertropical convergence zone, or where winds coming from the northern and southern hemisphere converge.

The northeast monsoon will also trigger partly cloudy to cloudy skies with isolated light rains in Metro Manila and the rest of Luzon.