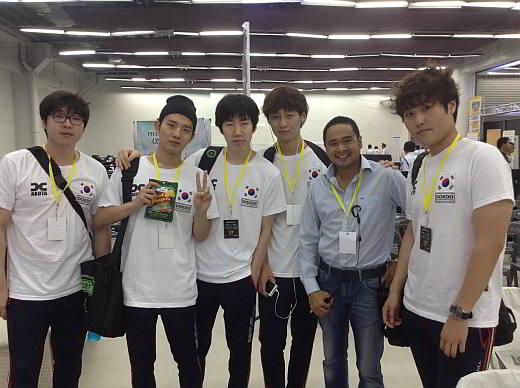 Back in his home city of Seoul, he’s known in-game as MVP.March.

March described his life as a professional gamer as a cycle of, “Wake up, work out, eat, play games, eat again, play games, sleep and repeat.”

“We didn’t really think we would get this far,” he said in an interview.

“When I started playing Dota 2 (Defense of the Ancients 2) , I thought I’d just put up a team and see where it would take us. We never thought we would be invited outside of the country.”

MVP.March traveled to Cebu with his four-member team, MVP.Phoenix, to compete in the e-Sports Festival 2014 held at the SM City Cebu Trade Hall last Sept. 13-14.

The video game tournament pitted the best players from across Mongolia, Indonesia, Malaysia, Thailand, Korea and the Philippines for a total prize pool of P430,000.

The Koreans stormed through the semi-finals with their trademark aggressive style of play that focuses on destroying enemy structures and outlasting enemy combatants in the field.

In the finals,  the Koreans edged out the Filipino MSI-evoGT from Manila in an action-packed best of three series.

South Korea, known as the most “wired” country in the world and the country with the most progressive systems in place for professional gaming, has had a long history with professional video gaming ever since the Korean e-Sports Authority (KESPA), the body tasked with the oversight of the video game industry in South Korea, was established in 2000.

“In Korea, we had some problems with illegal sports betting and gaming addiction and so KESPA was really active in that time to help educate gamers,” describes March.
“They really reach out and teach gamers what to do and really clean up their game so that we can have a more professional and lucrative industry.”

Part of KESPA’s drive to clean up and bring professional video gaming to mainstream appeal is standardizing the minimum requirements to enter the industry professionally, providing job and living security for players and workers alike.

“We really believe in our team house system in Korea. It originally started in Starcraft days and then the rest of the other games used it over the years,” said March.

Korean gaming houses are one of the requirements put in place by KESPA in order to put up a professionally competitive team in South Korea.

A gaming house functions both as the player’s training grounds and living quarters. Teams live, train and strategize together often for many months at a time. According to March, it’s the responsibility of team owners to file the necessary paperwork with the government, find a suitable gaming house and foot the living expenses of their players.

“The way our team house systems work, although you may not make any money if you’re a small team or if you’re just starting to join tournaments, you can at least live,” he said.
March said that almost everyone in the e-Sports industry in South Korea enjoys a salary, especially if they are particularly skilled or popular in their chosen games.

“The most popular and best players sometimes have six-figure salaries. Yes, that’s in US currency,” said March.

“In fact, in Korea some players become celebrities. A lot of their income comes from endorsements from their sponsors,” he said.

“Samsung sponsors a team for League of Legends (another game of the MOBA variety) and I’m quite close friends with them. Before I flew over here, I saw them on TV endorsing Samsung monitors.”

According to data gathered by Superdata Research, a digital goods research firm, the PC digital games market for the United States alone increased by 18% for 2014, an indicator of the video game industry’s ballooning growth in recent years.

In Korea, March said that more and more companies are looking to sponsor gaming teams in different genres to bag fresh celebrity advertisers for the 18-25 male demographic.

March recalled the time when he told his parents and friends that he was going to pursue gaming as a career.

“I faced some obstacles, but it wasn’t that bad. My parents were more open compared to older Korean parents,” recalls March.

“One day, I told my father that I was confident that I was going to make it in the industry so I showed him exactly how much gaming is worth in Korea. I said that after I’m done as a professional gamer that I can still earn this much just working inside the industry and then he said yes.”

“Of course, he wanted me to finish university first,” laughs March.

“That’s why I’m pretty old for a professional in Korea. I’m already 28. My family really wanted me to finish my studies first and they were OK with me playing games because then I can be studying on my computer and then relaxing by playing a game right away.”

“My friends weren’t even surprised. ‘You’ve always loved games so we’re not surprised you’re going to be a professional gamer,’ they used to say.”

With over 70 million people worldwide watching e-sports over the Internet and televised games, March says that he will remain with the industry for the foreseeable future.

In the past, South Korea made headlines when it showcased a professional match for Starcraft: Broodwar, a real-time strategy game featuring fictional spaceships, aliens and more, to a sold out crowd of 100,000 spectators in a football stadium.

During his stay in Cebu, March commented that the Philippines has what it takes to take professional gaming to the next level.

“There so much talent here and people are really into the game. I won’t be surprised if we get the next big teams from the Philippines,” he said.
Cebu team Arcanys Gaming is among the rare breed of gamers who actually work professionally in the country.

Team Arcanys, who bagged third place in the IeSF Asian Championships this weekend, works and trains out of their rented office space on the 7th floor of the CFI Cooperative building inside the Cebu provincial capitol compound.

The team, sponsored by the Arcanys Software Development Company, is composed of college students and the recently graduated.

In the past, team captain Heinrich Abad said that they were  unique in the Philippines as one of the few teams who also receive paychecks as professional gamers from their sponsor aside from the equipment support and branded merchandising.

“If you look at the popularity of DotA 2 in the Philippines, it’s actually much bigger here than in Korea. There are already some well-known teams in the Philippines and some of the talented players are living in Korea to join our leagues,” said March.

“With more support and help, the gaming industry here can be cleaned up too.”

Editor’s Note: Defense of the Ancients or DotA is a wildly popular multiplayer online battle arena made for the video game  Warcraft III.

Each team competes to destroy the opponents’ Ancient, heavily guarded structures at opposing corners of the map. Players use powerful units known as heroes. Players level up their heroes and use gold to buy equipment during the mission.