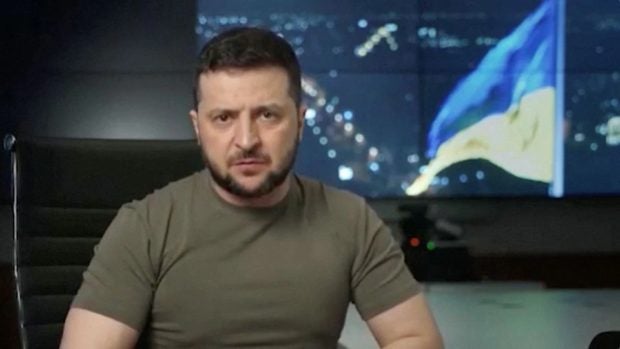 Ukrainian President Volodymyr Zelensky has accused Russian soldiers of deliberately mining areas in northern Ukraine as they withdraw or are pushed out by Ukrainian forces.

Ukraine says its troops have retaken control of more than 30 towns and villages in the Kyiv region since Russia announced this week it would scale down its operations around the capital and in the neighboring northern region of Chernihiv to focus on battles in the east.

“In the north of our country, the invaders are leaving. It is slow but noticeable. In some places they are being kicked out with fighting. Elsewhere they’re abandoning the positions themselves,” Zelensky said in a video address released on Saturday, without citing evidence.

“They are mining all this territory. Houses are mined, equipment is mined, even the bodies of dead people.”

Chernihiv Governor Viacheslav Chaus on Saturday also accused Russian troops of planting mines as they drew back from positions around the regional capital.

“There are a lot of mines. They (the villages) are strewn with them,” he said on national television.

Russia’s defence ministry did not reply to a request for comment on the allegations.

Reuters could not independently verify the allegations.

On Saturday, the emergencies service told people in the Kyiv region’s newly liberated zones to be vigilant, saying over 1,500 explosives had been found in one day during a search of the village of Dmytrivka, west of the capital.

Zelenskiy said efforts were ongoing to clear mines and secure the areas, but advised residents who had fled to stay away for now.

“It is still impossible to return to normal life as it was,” he said.

Ukraine and its allies call this a baseless pretext for a war of aggression. Since the invasion, more than 10 million people have been displaced from their homes.

Read Next
DOH-7: Over 1,500 seniors jabbed during special vax days