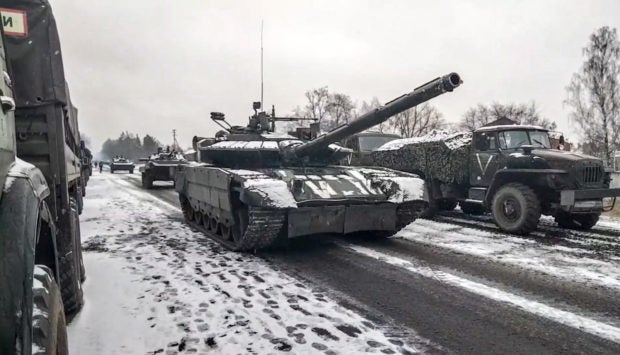 SKYBYN,  Ukraine – Firing a constant barrage of artillery at the Russians, a troop of Ukrainian soldiers are keeping up morale: their shelling has so far stopped Moscow’s tanks entering Kyiv from the east.

And they hope that the enemy forces, which have struggled to take large cities, will eventually get bogged down.

With his companions, he is keeping up a barrage of artillery from behind the front line, as regular explosions of heavy weaponry echo across the plain and an icy wind blows.

“Today the troops’ morale is at its highest,” said the muscular man in his 40s, radioing messages via a headset.

“The day before yesterday, we pushed back the Russian tanks” by a few hundred metres, he says, smiling, in a pause between two exchanges of fire.

A video of the feat, captured by a Ukrainian military drone and posted on social media, shows a column of about 20 Russian vehicles, many of them tanks, moving southwards along the motorway.

A sudden hail of shells and rockets hits the Russian convoy, blowing up first the lead tank and then one at the rear.

“We shot at them with tanks and rocket launchers,” Topaz says.

The Russian convoy makes a sudden half-turn and gets out of the village as quickly as it can.

“They went to hide in the nearby villages,” says Topaz.

The attack took place close to the village of Skybyn in the Kyiv region, a few kilometres from the road into Brovary, the eastern gateway into the capital.

According to several Ukrainian soldiers, at least two Russian vehicles, one of them a tank, were destroyed — which the video appears to support — and a Russian tank commander was killed.

On the Ukrainian side, “we had five wounded, one of whom is in a critical condition”, after the Russian side opened fire in response, says one soldier, Ilya Berezenko, 27.

Since the invasion began on March 24, the Russian troops have seized numerous pockets of strategically important territory, particularly along the southern coast and to the east and north and are now positioned at Kyiv’s northwestern and eastern edges.

But they seem to have run into difficulties in winning large cities such as Chernigiv or Kharkiv and in the northeastern Kyiv suburbs of Bucha and Irpin, as well as in the east.

While Russia’s bombardment is massive and deadly, raising fears it will lay waste to cities as it did in Chechnya and Syria, the ground troops around Kyiv particularly seem to have hardly moved in recent days, according to a number of military experts.

To the east of Kyiv, Russian tanks a few days ago reached a point a few kilometres from Brovary, with the initial impression being that they had driven 150 kilometres (90 miles) from Belarus in the north, a close ally they can use as a rear base.

But Ukrainian military and numerous defence experts say the Russians actually travelled from the east and from Sumy some 300 kilometres away, near the Russian border, taking small roads through sparsely populated areas.

At the start of the week, the Russian tanks arrived a few kilometres from Brovary and positioned themselves in surrounding villages. Locals said they counted more than 70 military vehicles, including around 40 tanks and around 300 soldiers.

This column, or part of it, then moved towards Brovary and Kyiv and was halted Thursday at Skybyn, according to Ukrainian military experts, who question whether the Russians seriously thought they could use a few dozen tanks to enter Kyiv — a city of three million prior to the invasion and now fortified with barricades.

“I don’t know why they are doing that,” says Berezenko.

“You’d have to be mad, or misinformed… Or else they just want to confuse us.”

The incident in Skybyn reinforces Ukrainian soldiers’ belief that the Russians have overestimated their resources, in terms of troops and equipment, and underestimated those of their opponent.

“They have to camp in villages in temperatures of nearly minus 10 Celsius at night. They lack provisions and have to raid houses,” adds the Ukrainian soldier.

The Russians nevertheless have advanced far enough to raise fears of Kyiv becoming encircled imminently. In the capital, only the roads to the south are still open and the city is preparing to mount a “relentless defence”, according to the Ukrainian presidency.

The Russians could continue to destroy and bomb Ukraine, but they “don’t have enough men or equipment to occupy the country,” says Berezenko, giving his view that Moscow’s soldiers are “not numerous enough and (are) far from home” and “will end up wearing themselves out”.