NBA: Stephen Curry pours in 30 as Warriors knock out Nuggets 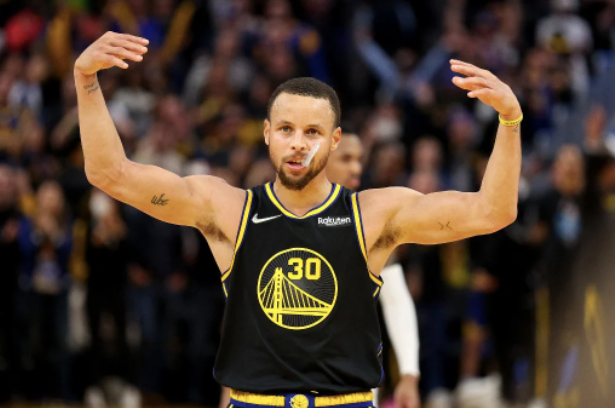 Stephen Curry #30 of the Golden State Warriors reacts in the finals seconds of their victory over the Denver Nuggets in Game Five of the Western Conference First Round NBA Playoffs at Chase Center on April 27, 2022 in San Francisco, California. Ezra Shaw/Getty Images/AFP

Stephen Curry scored 30 points in his first start of the series and the Golden State Warriors clinched their first-round matchup with a 102-98 victory over the Denver Nuggets in Game 5 on Wednesday night in San Francisco.

Golden State will face either the Memphis Grizzlies or Minnesota Timberwolves in the second round of the Western Conference playoffs.

Curry made five 3-point baskets and also had five rebounds and five assists. He came off the bench in the first four games of the series after recovering from a left foot injury.

Nothing but respect between the @warriors & @nuggets after a tough series. pic.twitter.com/3a2jabLSrl

Nikola Jokic registered 30 points, 19 rebounds and eight assists for the Nuggets despite tweaking his right hamstring early in the third quarter. The reigning MVP scored 12 of Denver’s final 14 points.

The game was tied at 90 before Payton drove for a layup with 2:10 remaining and Curry followed with a driving hoop with 1:33 left. Jokic scored on the inside to cut Denver’s deficit to two before Payton drilled a 3-pointer to make it 97-92 with 1:06 left.

Jokic scored again with 53.1 seconds left, but Curry’s layup with 29.9 seconds remaining again made it a five-point margin, and the Warriors closed it out.

Golden State then erupted on an 14-5 surge. Curry drained two 3-pointers in a span of 41 seconds to bring the Warriors within one. After Barton drilled a trey for the Nuggets, Curry splashed another 3-pointer as Golden State crept within 71-70 with 2:20 to play.

Cousins scored the final seven points of the quarter — including a 3-pointer with 1.3 seconds left — as Denver took a 78-70 lead into the final stanza.

The Nuggets went on a 12-4 burst late in the first half to take a three-point edge. Thompson’s 3-pointer with 49.2 seconds remaining knotted the score at 48 going into the break.