Report old trees that need to be cut down, Mandaue firemen urge residents 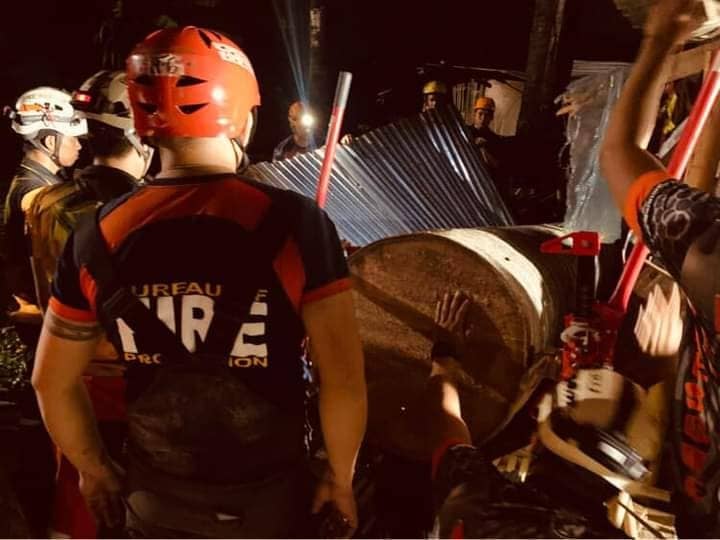 Rescuers search for the bodies of a couple who died when they were pinned by a fallen Buli palm tree at 1 a.m. on Wednesday, May 4, in Mandaue City.   / photo courtesy of Mandaue City Fire Office

MANDAUE CITY, Philippines — The Mandaue City Fire Office is encouraging residents to request or report to the barangay if there are trees that need to be cut down.

The call was made after a couple died when an old Buli palm tree fell into their house pinning them to death while they were asleep.

The tragedy happened in Sitio Kanipaan in Barangay Basak, Mandaue City at around 1 a.m on Wednesday, May 4, 2022.

The couple was identified by the rescuers as Rizalda Giducos, 45 years old, and Benjie Giducos, 43 years old.

Fire Officer 1 Riel Denura of the Mandaue City Fire Office, said after the incident many residents asked them to cut the trees near their houses. Denura said they forwarded the requests to the barangay since they were under the barangay’s jurisdiction.

Denura said there is no need to ask permission from the Department of Environment and Natural Resources if the trees pose an imminent danger.

He said there were a few palm trees remaining in Sitio Kanipaan which is a swampy area.

Denura revealed that according to the residents, the palm tree that fell was already partially uprooted because of the strong winds brought by super typhoon Odette last December 2021.

The couple was sleeping when the tree, which was located just beside their house, fell.

Denura said two houses were also damaged but only the makeshift house of the couple was destroyed. The other house was partially damaged with none reported injured.    /rcg