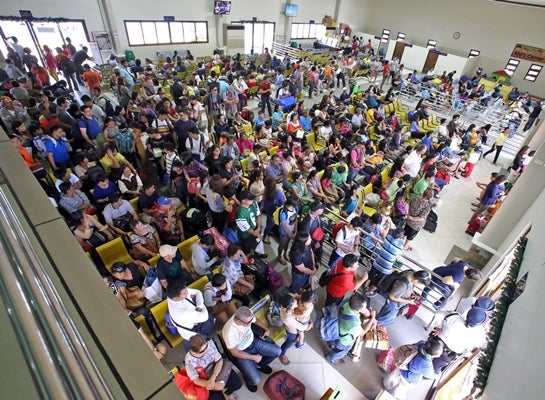 Sixty-year old Filadelfa Abainza is exhausted after an eight-hour delay in her trip to Manila.

She and her nephew left Dalaguete town in southern Cebu early yesterday to catch the 12 noon voyage of MV St. Paul John II of 2Go Travel.

They arrived at 10 a.m at the passenger terminal of Pier 1 hoping to be on time for the trip to Manila in time for the All Saints’ and All Souls’ Days.

Another passenger, overseas Filipino worker Roger Paquera, was also Manila-bound for his trip to Saudi Arabia.

He was also disappointment because his ticket indicated 12 p.m. as the time of departure.
No official explanation on the delay was given to the passengers.

Lito Salvio, vice president of 2Go Shipping said the estimated time of the vessel’s arrival in Cebu was 4:30 p.m yesterday.

Salvio explained that “it was an accumulated delay. A domino effect due to port congestion in Manila. The effect is not only here in Cebu but also in Cagayan De Oro.”

MV St. John Paul II, which was enroute to Cagayan de Oro via Cebu last Monday, was delayed by six and a half hours.

Last Monday, a balikbayan from the US, who requested anonymity, shared his frustration on the backward transportation system in the country.

He and his son were traveling to Cagayan de Oro and had to endure more than six hours of delay.

“It’s more on operations — the loading and unloading of the cargo which resulted in port time extension.

The heavy container trucks traffic in Manila is also another reason,” he told CDN.

“I hope the vessels should be on time. If 2Go finds Manila congestion as the reason behind the delays then they should adjust their schedules,” Uckung said.

Aside from the repairs of the passenger terminal in Pier 3, the passenger congestion in Pier 1’s terminal is caused by the stream of passengers for the coming All Saints’ Day and All Souls’ Day.

Uckung said they have turned on their air-conditioning units in full blast to ensure the comfort of passengers.

“Once the Pier 3 terminal renovation is done in December, the passengers transfered from 2GO terminal to Pier 1 may already be accommodated in Pier 3,” Uckung said.

Read Next
Tomas no-show in unveiling of Serging’s monument