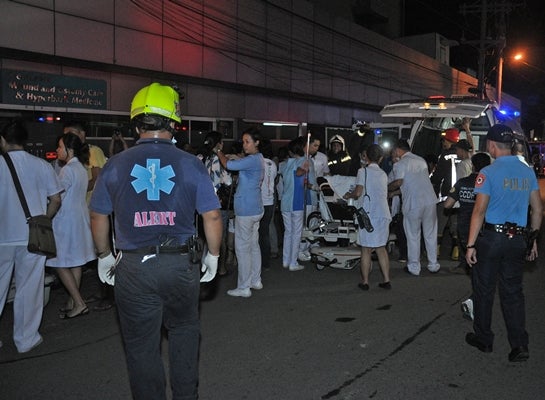 Patients were evacuated from the Cebu Doctor’s University Hospital after a fire hit its linen department around 8 p.m., Tuesday. Patients were wheeled out and brought to nearby Hospitals. (CDN PHOTO/CHRISTIAN MANINGO)

The administration of Cebu Doctors’ University Hospital yesterday agreed to install a water sprinkler system in the building after a fire forced the private hospital to temporarily shut down on Tuesday night.

Every hospital or health care facility is required to have a sprinkler system under the Fire Code of the Philippines as amended in 2008, said Bongabong.

“We asked them why there was no sprinkler. They said they would be installing one,” Bongabong told Cebu Daily News.

He gave the hospital a “grace period” to put in a water system that would be automatically activated by the presence of smoke or flames.

“We have already made a commitment and we will comply with that ,” said Oscar Tuason, vice president for administration after meeting with the fire marshal yesterday morning.

Over 200 patients were safely transferred to other hospitals immediately after the fire broke out about 8 p.m. on Oct. 28 at the linen department located in the basement.

The cause of the fire is still under investigation.

Probers are looking into the possibility that embers from welding work on a ramp above the basement may have started the fire.

Bongabong said investigators gathered “new information”after talking to witnesses as well as workers of Dakay Construction and Development Corp. who were building a ramp connecting the hospital to another building.

Fire probers spoke with a carpenter, Jerry Toquero and a foreman Presilo Bulhano, who were working on the day of the fire. Their sworn statements are being gathered, he said.

“They heard an explosion and saw something spark and then smoke came from the linen department but we still have to validate this and gather more evidence,” Bongabong said.

F03 Roylin Maratas, chief investigator, said the carpenter and foreman confirmed that welding work was done on the ramp but that they only worked until 7 p.m. The fire alarm was received an hour after at 8:11 p.m.

“It’s possible embers fell down to the linen department which was below them. There’s a circular opening or an air duct where the embers could have entered,” Maratas said.

However, no conclusion could be made yet, as the investigation continues.

The linen department used as a washing and drying area was gutted. The concrete structure itself didn’t collapse. The washing area was partly damaged.

The patients’ rooms, laboratory and major equipment were intact although soot blackened the lobby and other interiors of the hospital.

Initial estimates of structural damage were placed at P100,000.

Maratas said the fire was put under control 28 minutes after the alarm was received at 8 :11 p.m. and was extinguished by 11:49 p.m.

The generator room where tanks of LPG, acetylene, and supplies of crude and gasoline were stored was also burned.

Maratas said firefighters had difficulty dousing the flames and had to use chemical foam aside from water to put it out.

It was CDUH’s third and most serious fire since the Larrazabal family-owned hospital was founded in 1972, according to Dr. Potenciano “Yong” Larrazabal in a Facebook post after the fire.

The first fire was caused by “a disgruntled office employee” in the 1980s and the second occurred during last year’s 7.2-magnitude earthquake when a locked fuse box of a cellular company caught fire, he said.

A public notice by CDUH that ran in local dailies said all patients were accounted for and that the hospital has temporarily suspended operation until the cleanup is finished, and “the hospital is safe and functional.”

It said doctors’ offices at the Medical Arts Building 2 are still open for patient consultation, as well as the out-patient pharmacy, laboratory, X-ray, ultrasound and minor operating room services.

Gayle Magdadaro, a 21-year-old pharmacist, said she was on duty in the hospital pharmacy when she and co-workers noticed something burning which prompted them to go outside.

“There was smoke in the lobby,” she recalled.

Before they left, they turned off the office computers, locked all drawers and compartments.

Yesterday morning, some staff returned to get refrigerated drugs stored inside the pharmacy, said “Mam Lor”, the pharmacy clerk.

She said the floor and stairs in the hospital are still covered in soot.

Ikay Aplicador, who is six months pregnant, was confined for Urinary Tract Infection (UTI) in the hospital when the fire struck. She was lying on a hospital bed of the OB-GYN ward when she felt the room got warm.

She thought it was just a sign that it would rain that night. Then she heard something explode.

(We heard a blast and thought it was just part of construction work since they usually did drilling. Then someone was shouting – leave it! run away, run away! We didn’t hear any emergency or announcement. When we saw the nurses slowly going downstairs, we started getting our belongings and followed them.)

Aplicador said she first saw yellow flames coming from the stairs of the third floor going upwards to an open area of the hospital building. She said a blue flame was later seen in the open area of the building.
Aplicador was the female patient seen bringing her own dextrose bottle.

She said she didn’t mind handling her own exit since the nurses had their hands full helping other patients, especially the elderly and other pregnant women who needed assistance./With Aileen Garcia-Yap