MANILA, Philippines — The first case of monkeypox has been detected in the Philippines, the Department of Health (DOH) reported Friday.

DOH’s Dr. Beverly Ho said the case is a 31-year-old Filipino national who arrived from abroad last July 19. The case had prior travel to countries with documented monkeypox cases.

Ho said the case was tested and confirmed positive for monkeypox through reverse transcription–polymerase chain reaction (RT-PCR) done at the DOH Research Institute for Tropical Medicine on July 28.

“The DOH detects the first confirmed case of monkeypox in the Philippines,” Ho said in a press briefing in Malacanang.

“The case has been discharged well and is undergoing strict isolation and monitoring at home,” she added.

Ho said the case is “recovering well at home”. 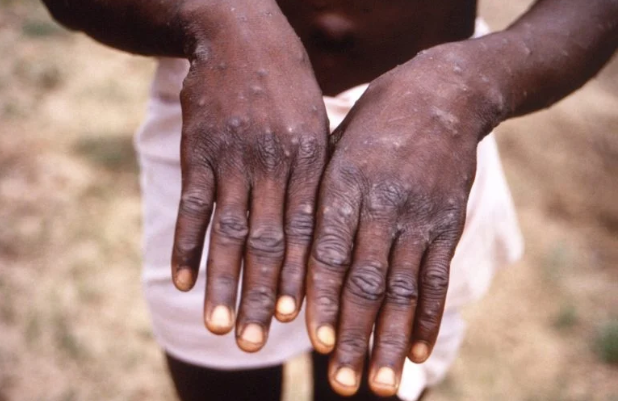 (FILE PHOTO) In this file handout photo provided by the Centers for Disease Control and Prevention taken in 1997 during an investigation into an outbreak of monkeypox, which took place in the Democratic Republic of the Congo (DRC), depicts the dorsal surfaces of a monkeypox case in a patient who was displaying the appearance of the characteristic rash during its recuperative stage. (Photo by Brian W.J. Mahy / Centers for Disease Control and Prevention / AFP)

Ho said DOH has completed its case investigation and identification of close contacts.

“Ten close contacts were recorded of which three were from the same household. All have been advised to quarantine and are being monitored by the department,” Ho said.

Ho said there are no symptoms so far for the close contacts as they remain under quarantine.

She said that based on guidelines, close contacts need to quarantine for 14 to 21 days upon the onset of symptoms.

“The DOH assures everyone that our public health surveillance systems are able to detect and confirm monkeypox cases,” she added.

The health official said the Filipino who contracted monkeypox underwent screening upon arrival in the Philippines.

“We all know that the symptoms do not necessarily come out earlier. Yung iba much later,” Ho said.

As to passengers coming from abroad, Ho said the Bureau of Quarantine has screening questions about monkeypox. Temperature screening is also conducted in airports, she added.

The World Health Organization earlier said the rapidly spreading monkeypox outbreak is a “public health emergency of international concern” – designed to sound an alarm that a coordinated international response is needed and could unlock funding and global efforts to collaborate on sharing vaccines and treatments.

Read Next
Exploring new business? Get into Franchising