Amid a firestorm of corruption allegations, hundreds of supporters lined the streets as Vice President Jejomar Binay walked through  the  public markets “to meet the people” yesterday morning.

The activity appeared like a campaign sortie as Binay spent  time shaking the hands   of people and have selfies taken with him.

At one point, Cebu City Mayor Michael Rama referred to Binay as the “coming President” when he introduced him to the people.

Aside from barangay officials, senior citizens and other supporters who joined the walk wearing green shirts, some residents of barangays Ermita, Pasil and Basak-San Nicolas went out of their houses and waited by the roadside to catch a glimpse of the second highest national official.

Binay said  he will be pushing for more improvements in  Cebu.

Rama, for his part, said the crowd that came out yesterday was proof of the people’s support for Binay.

Binay and Rama were joined by Valenzuela City Rep. Sherwin Gatchalian, Cebu City Vice Mayor Edgardo Labella, and other city officials in the walk through.

The group gathered at the Senior Citizen’s Park fronting the City Hall then proceeded to the Carbon Public Market going through interior residential areas in barangay Pasil.

They also passed by the old Pasil Fish Market which was demolished following last year’s earthquake. 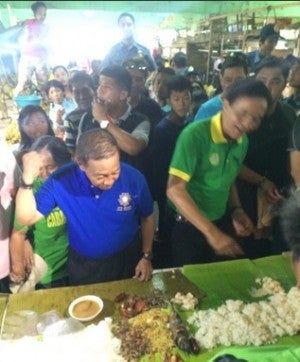 Their last stop was at the Taboan Public Market where Buhay party-list Rep. Lito Atienza joined them. The officials then had a boodle fight with the vendors inside the market.

The entire walk, which started at 7:30 am, lasted  three hours.

Although the route was relatively short, it took longer since Binay frequently stopped and shook hands with the people who were waiting by the roadside.

White shirts which bore the words “Tatak Binay” were also distributed to some people.

Rama has been vocal with wanting councilor Gerry Carillo as Team Rama’s bet for the city’s south district congressional seat in the coming 2016 elections.

Binay heads the United Nationalist Alliance (UNA) which was Rama’s political party during last year’s election. Rama said he will continue to be with UNA until 2016.

While he too is seeking the truth, Cebu Archbishop Jose Palma believes that a Senate inquiry is not the best forum to address irregularities in the country.

Responding to media queries regarding the Senate investigation against Binay, Palma said legislators spend too much time in conducting inquiries when there are equally relevant issues that need their attention.

The 63-year-old prelate was in a quandary as to the results of previous Senate inquiries and what good it had brought to the people.