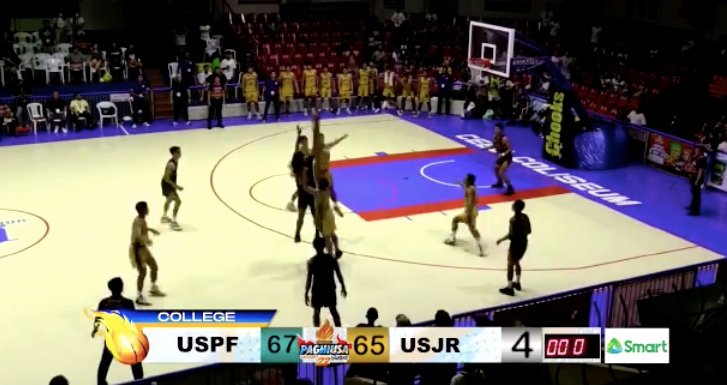 Cesafi commissioner Felix Tiukinhoy said they are temporarily stopping the live streaming of games on Cesafi’s official Facebook page mainly due to the negative comments they received after handing out a decision on last Sunday’s controversial buzzer-beating three-point shot of University of San Jose-Recoletos’s (USJ-R) Elmer Echavez.

READ: Cesafi officials on Jaguars’ 3-point buzzer-beater against Panthers: It is counted

Echavez’s shot won them the game against the University of Southern Philippines Foundation (USPF) Panthers, 68-67.

The league, though, drew flak from many Cebuano basketball fans as they believed that, based on the live stream,  Echavez hadn’t released the shot as time expired on the clock.

Because of this, Cesafi decided to stop airing the live games for the meantime.

“We regret to inform you that temporarily we will stop showing the basketball  games in live stream due to negative comments in posts as everybody wants to be part of officiating too. Their posts, without their knowing, it is a cyber libel crime already per lawyers,” said  Tiukinhoy in a statement sent to CDN Digital via messaging on Thursday, November 17.

Tiukunhoy, however, said that games will still be covered by their crew but in a recorded basis.

“We will however cover and record the games and have it shown in delayed telecast in Sky cable and Solar TV. Without live streaming, they would understand hopefully that it can not be used to reverse the calls of the referees,” Tiukinhoy added

With the defeat, USPF remains at the No. 2 spot with five wins and three losses, while the Jaguars earned their third win in seven games to climb to the No. 4 spot.

Games on Thursday pit the USJ-R Baby Jaguars and the USPF Baby Panthers at 5:15 p.m. followed by a men’s game between the University of the Visayas Green Lancers and the USPF Panthers.