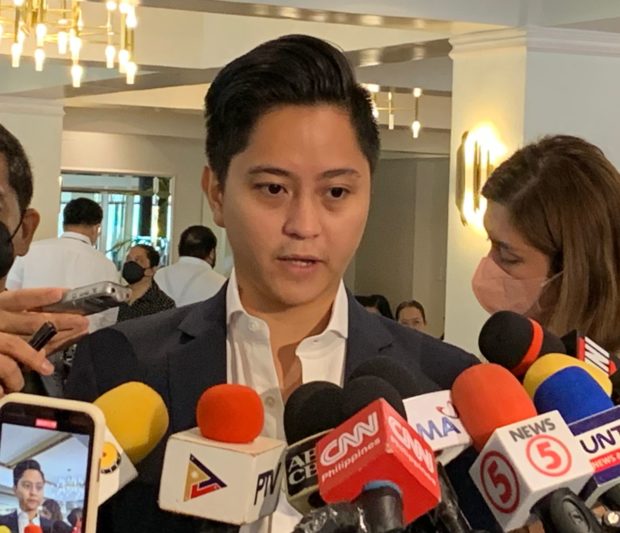 MANILA, Philippines — To ensure that the proposed Maharlika Investment Fund (MIF) remains non-partisan, Ilocos Norte 1st District Rep. Sandro Marcos said on Monday that technocrats should be at the helm of the system’s management.

Marcos — son of President Ferdinand “Bongbong” Marcos Jr. — said during an ambush interview that while the proposed sovereign wealth fund (SWF) would fall under his father’s term, it should be considered from a perspective beyond the current administration.

Under the bill, the proposed Maharlika Investment Corporation will source funds for the SWF from government-controlled corporations, which will be used to make local and foreign investments. The sitting president will be the board’s chairman, but other officials will also be part of the decision-making process.

“Of course, it’s been politicized, but the whole point of this exercise is that this corporation will be free from politics. That’s why it needs to be run by technocrats, wala silang interesado sa politika (they are not interested in politics),” the lawmaker, who is one of the authors of House Bill No. 6398, said.

“Yes, the president will be the chairman of the board. But you have to look at it beyond this administration. This isn’t something for the next six years. If you look at the success of what these sovereign wealth funds have done, you cannot dispute naman. Look at Indonesia, one year pa lang silang nakatayo, ang laki na ng kita ng sovereign wealth fund nila,” he added.

(Look at Indonesia, it has been only a year since it was established, but they have a significant sovereign wealth fund.)

According to Marcos, now is the right time to push with the SWF proposal, as it would ensure economic progress — as the government would no longer need to tap its national funds to initiate big-ticket programs.

“So you know, if you ask, when will it be the right time, or it’s not the right time now, kung ganoon ang (if that is the) mindset it will never be the right time. So we have to make sure, the interest of national development, that we are doing everything we can,” Marcos said.

The younger Marcos said this after many sectors criticized House Bill No. 6398 for possibly opening the floodgates for corrupt activities. At least two lawmakers from the House minority have questioned the need for the SWF, asking why the country would opt for an investment fund when the country is deep in foreign and local debt.

No less than the President’s sister and Rep. Sandro Marcos’ aunt, Senator Imee Marcos, said that she is unsure if now is the right time for such a proposal.

Alliance of Concerned Teachers Rep. France Castro also questioned whether it is ethical to use premiums from private and public employees, along with taxpayers’ money, to pump the MIF — considering that a huge chunk of the proposed SWF would come from the Social Security System (SSS) and Government Service Insurance System (GSIS).

Another author in Marikina 2nd District Rep. Stella Quimbo, assured that GSIS would only use funds not included in its expected benefits pay for a year.

Rep. Marcos also assured the public that they would be ready to defend the bill — whether with the press or in the plenary. However, he said he is willing to defer to two of the best economic minds in the House, Albay 2nd District Rep. Joey Salceda and Marikina 2nd District Rep. Stella Quimbo.

“Sa plenary yes, sure, why not, but at the same time, I have two of the most brilliant economists in the country — well not I, but you know, the House […] in the form of Joey Salceda and Stella Quimbo who is by, you know, by far, the best equipped to explain it in more clear terms than I could ever,” Marcos said.

Marcos also shot down accusations that the bill was being railroaded and that stakeholders were not consulted.

Earlier, the lawmaker also defended the bill’s proponents, saying that creating a SWF is not a new idea — having been proposed under previous administrations.