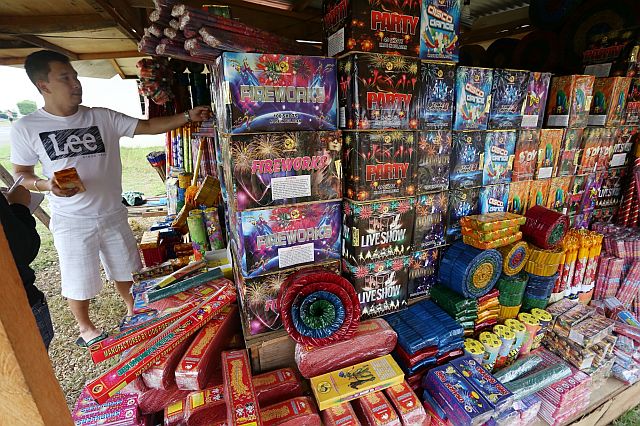 Firecracker vendors display their wares at the back of the Sugbu building at the South Road Properties (SRP) in this December 2015 file photo.

MANDAUE CITY, Philippines — The selling and lighting of firecrackers this Christmas and New Year in Mandaue City may still be taboo.

Mayor Jonas Cortes on Wednesday, December 7, said that they already had initial talks with the Mandaue City Police Office and the city would probably continue to prohibit the selling and use of firecrackers.

Mandaue City banned the lighting of firecrackers for years now as a means to prevent accidents and fires.

The selling of firecrackers in Mandaue was prohibited after the December 2009 explosion at the designated “firecracker zone” in the Mandaue reclamation area that killed three people and injured six others while the use of firecrackers was banned in 2017, about the same time when former President Rodrigo Duterte in issued Executive Order No. 28.

Under EO No. 28, the use of firecrackers is confined to community fireworks displays to minimize the risk of injuries or deaths.

Cortes said that they may only allow fireworks displays but they still need to meet with the Bureau of Fire and Protection and the Mandaue City Police Office on their recommendations.

Cortes said there should be guidelines and precautionary measures to be followed.

P240,000 worth of illegal firecrackers destroyed in Cebu City