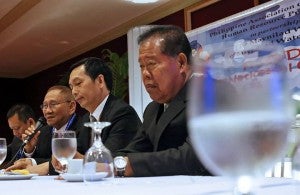 Water districts from around the country are lobbying Congress for their exemption from taxes .

Arturo Villasan, spokesman of the Philippine Association of Water Districts (PAWD), said a tax exemption bill has already passed Congress and is now on second reading at the Senate.

But there was a rider that stipulated conditions to be followed before all tax dues could be removed.

“Recently, some of us have been levied tax assessments,” Villasan said.

He said the bill being lobbied by PAWD removes all present conditions for the exemption of water districts from paying taxes.

Subsidy
He said once the bill is made into law, water districts all over the country will not have to raise their rates.

“If we are taxed, where will we get the money to pay? Of course, from the consumers,” Villasan said.

With income taxed at 30 percent, water districts all over the country are expected to pay P800 million to P1 billion to the Bureau of Internal Revenue (BIR) in a year.

Villasan said while water districts are owned and operated by government, they don’t receive government subsidy.

He said water districts solely operate on what they earn from their consumers, just like any other private corporation.

National scale
However, they don’t get dividends by the end of the year. If they have surplus funds, it will only be used for the expansion of its operations.

The concerted effort of lobbying for the said has been one of the benefits of creating the PAWD, Villasan said.

There are over 800 water districts in the country, but only 512 are operational.

Villasan said the PAWD was formed to help protect the water districts as well as to advance their interests on a national scale.

Yesterday marked the beginning of a two-day national gathering where more than 1,200 representatives from all water districts in the country came.

Technical sessions
The conference will be held at the Waterfront Hotel and Casino in Lahug, Cebu City.

Participating water district representatives will be able to learn from one another in terms of practices.

The Metropolitan Cebu Water District is the host for this year’s national conference.

Delco said the participants will participate in technical sessions this morning and the closing ceremonies will be held this evening.