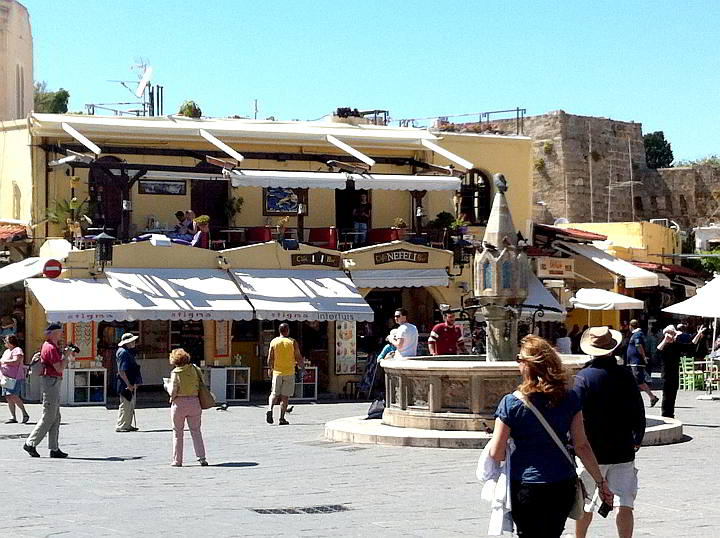 One of the town squares in Rhodes, Greece and the Nefeli Cafe

Whenever we travel, we make it a point to partake of certain local delicacies—pizza and gelato in Italy, curry in India, or bratwurst in Germany. But sometimes, something takes us completely by surprise… One of those experiences happened in the city of Rhodes, Greece.

If you say “crêpe,” visions of Paris and the Eiffel Tower easily come to mind. We have traveled on every coast of France, from the French Riviera in the south, all the way to Normandy and the northern coast and everything in between. But where do we find the best crêpe? In Rhodes, Greece, of all places! Most people probably haven’t even heard of Rhodes, not like Athens or Santorini.

Rhodes is a Greek island in the Aegean Sea that is located closer to the country of Turkey than mainland Greece. It is the largest in a string of islands called the Dodecanese Islands and has a population of 115,000 people. The capital city is also called Rhodes and has just over 50,000 people living there. Go back in time about 2,000 years and Rhodes was incredibly important as it was the site of one of the Seven Wonders of the Ancient World: the Colossus of Rhodes, a giant statue of the Greek sun God Helios. Unfortunately, the giant statue lasted less than 60 years because  an earthquake completely destroyed it, but at 98 feet tall, it was one of the largest statues of the ancient world. Not long after, in the first century AD, Saint Paul brought Christianity to the island. Today, the Medieval Old Town
has been declared a UNESCO World Heritage Site and is a popular tourist destination within Europe.

In one of our first visits about four years ago, Anna and I were typical tourists, just walking around the old town and taking everything in. The old city is an easy place to walk with picturesque high city walls, an old castle, and a lot of cafes and restaurants when you want to take a break.

Actually, most of the restaurants and cafes look similar, without much to distinguish one from the other. But, as luck would have it, we were able to find something really special.

While the crepe would normally be associated with France, we found a great little crêpe place named Nefeli Café, right in the middle of Old Town Rhodes. What was it that drew us to that specific café? 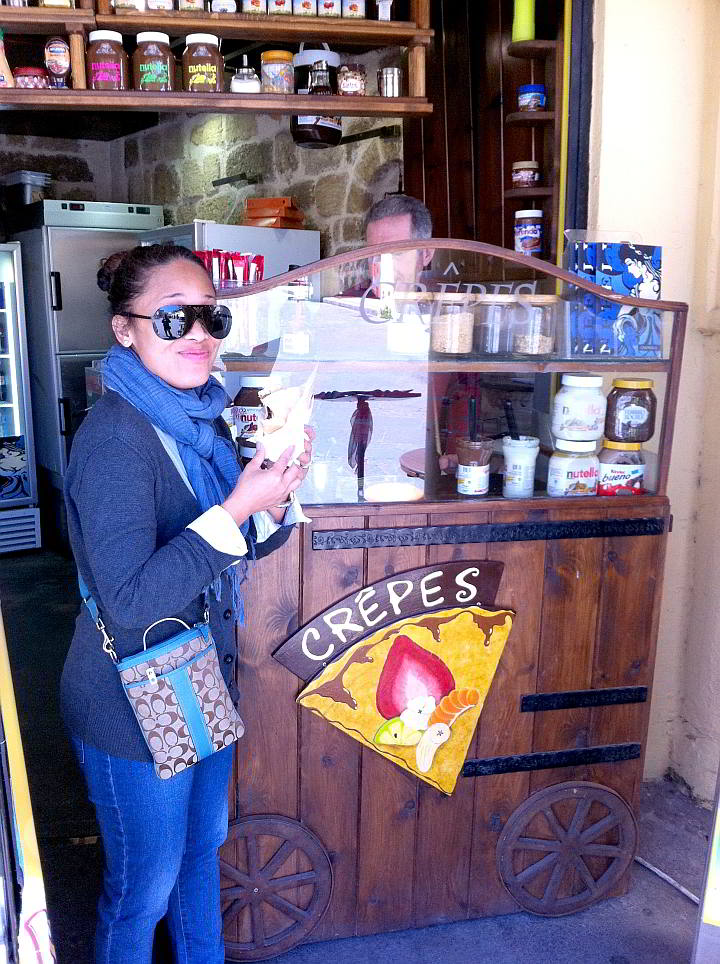 They had a large bottle of what looked like white Nutella in front of the café. Anna and I both love Nutella, but even with all of our travels we had never seen a white version. We knew this is what we had to order. With the thin, hot crêpe warming the white chocolate spread… it was one of the best things I had tasted. We sat and enjoyed our crêpes and eventually made our way back to the ship.

Not too long after that experience, Anna signed off and returned to Cebu for a vacation and then went to work at  another ship in the fleet. When my contract finished, I flew from the United States to Europe to visit Anna.

We were excited because in the itinerary was Rhodes, Greece, and we knew exactly where to go. We went back to Nefeli Café and enjoyed the crêpes, which were every bit as  good as the first time we tasted it. As a matter of fact, Nefeli Café  became one of “our places.”

Fast forward, and for almost a year, Anna and I were required to be in a long distance relationship, working  in separate ships.   Sometimes we visited the same cities, but on different days. When either of our ships included a stop in Rhodes, we would send a photo of Nefeli Café and its amazing crêpe to the other.

After 2012, Anna and I were married and took time away from ship work and stayed full time in Cebu. In 2014, we were offered positions for another world cruise, starting in Asia and traveling to over 40 countries and finishing in Europe. Guess where one of those stops was? Yes, it was a trip back to our little café in Rhodes. In our two-year absence, we had missed this little place and its warm, gooey white Nutella perfection. 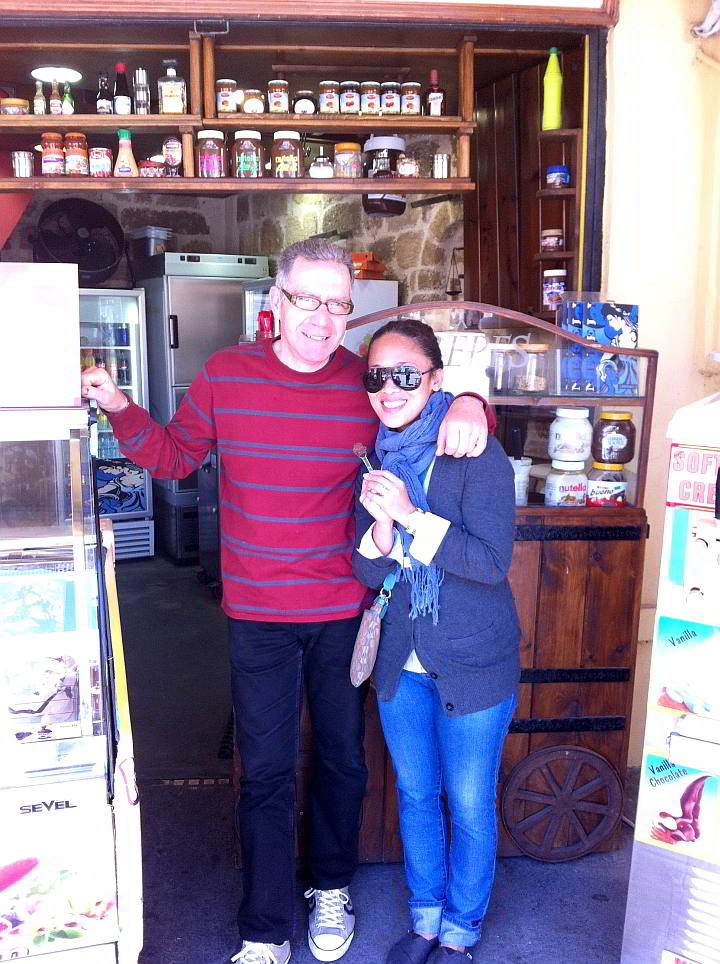 Dino, the owner of Nefeli Cafe, with Anna

The day arrived our ship docked in Rhodes, we headed straight to the café.  Everything looked exactly the same as it did on our first visit four years ago. But there was this new person there, a friendly older man who greeted us with a smile. We were so excited that we shared the story of our visits there. His face gleamed and we could tell that this place was special to him, too. It turns out that his name was Dino, and he was the owner of Nefeli Café, a place he opened himself in 1991. After all these visits and crêpes, Anna and I finally met the man responsible for it all. 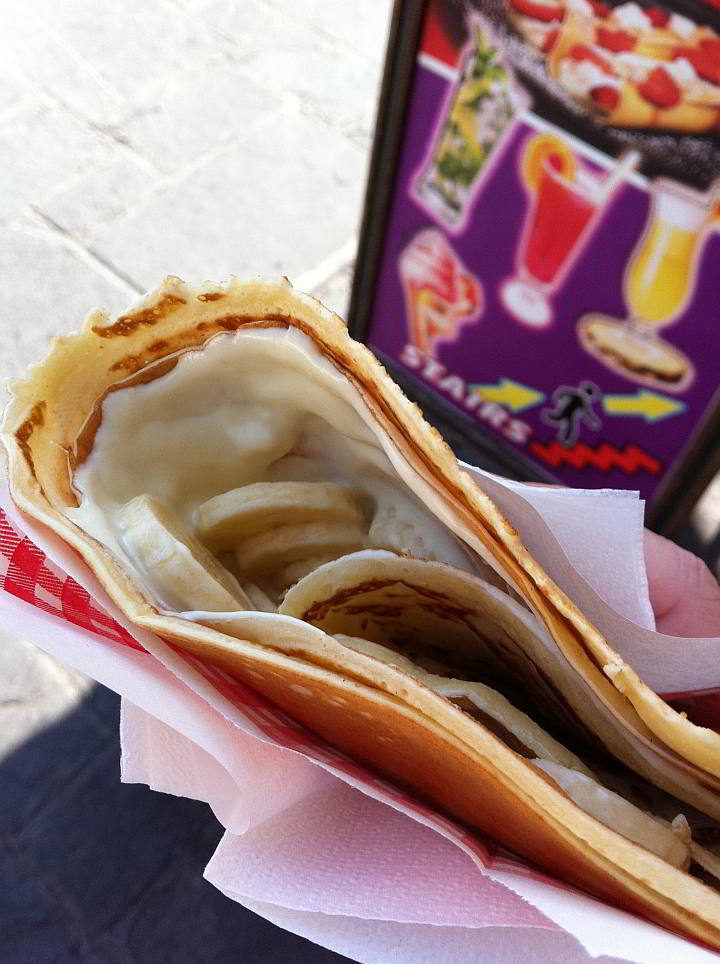 A crepe filled with white Nutella and banana

After sharing photos we had taken in the past four years, the first thing we had to ask Dino was about the white Nutella and other spreads. We have been to over 60 countries around the world and never found them anywhere else. From him we learned  that there is one person in the town of Rhodes who makes them from scratch and supplies them to the café. That person studied the flavors of classic chocolates and recreated it in a spread, and then also added their own twist in the cast of white chocolate Nutella. Finally, we had the answer!

The story was now complete having met Dino, the man behind it all.  What began as a delicious discovery in this  small cafe has turned into something that we’ll share forever.