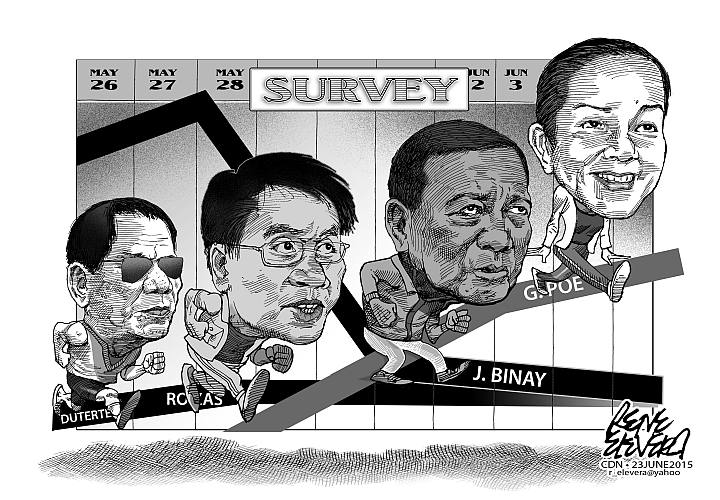 Another month, another survey of presidential wannabes and prospects.

This time, Pulse Asia showed neophyte Sen. Grace Poe overtaking Vice President Jejomar Binay with a preference rate of 30 percent among voters compared to 22 percent for the country’s No. 2 official.

The survey period was 30 to June 5 or about a few weeks after  the Senate blue ribbon committee recommended the filing of graft charges against the Vice President in relation to the multi-billion peso Makati City building II that they said is riddled with corruption.

In  the survey, randomly selected respondents were asked who they thought would win the presidency.  Results showed that  Poe would beat Binay decisively, not convincingly given the eight point margin that could change anytime like the weather.

Poe’s strong showing wasn’t a fluke as evidenced by the June 3 to 5 survey of the Social Weather Station (SWS) which showed her registering 42 percent with respondents who were asked their preference on who will succeed President Benigno Aquino III once he steps down from office next year.

She kept a comfortable distance from Binay, who registered 34 percent. For now, it seemed as if the Senate blue committee investigation, termed as a demolition job by the Binay camp, had truly dented the Vice President’s ratings.

Binay is having difficulty landing a running mate willing enough to risk his or her political capital in exchange for a shot at the Palace that had become tenuous at best.

Both Poe and Binay have strong support in the Visayas which counts Cebu, Iloilo and the newly created Negros region as among the vote-rich areas outside of Luzon.

Though he has yet to confirm his bid due to waiting for that official endorsement from President Benigno Aquino III, the wife of Interior and Local Governments Secretary Mar Roxas, broadcaster Korina Sanchez had been crisscrossing the country to raise his visibility with the voters.

How the President’s endorsement would impact on Roxas’s bid cannot be quantified as of now but at this stage and with him running far behind Poe and Binay, Roxas—who is in a statistical tie with Manila City Mayor Joseph Estrada—needs every boost to shore up his flagging campaign.

The President is supposed to make his decision after his final State of the Nation Address (SONA) or maybe even during the SONA as hoped for by his Liberal Party (LP) allies.

Despite the allegations against him, Binay remains confident he can get the President’s endorsement. That possibility as it stands now, is a lot more remote than the LP landing Poe as its vice presidential bet. This makes P-Noy’s final SONA, something to look forward to and not just for his final list of promises to the people.