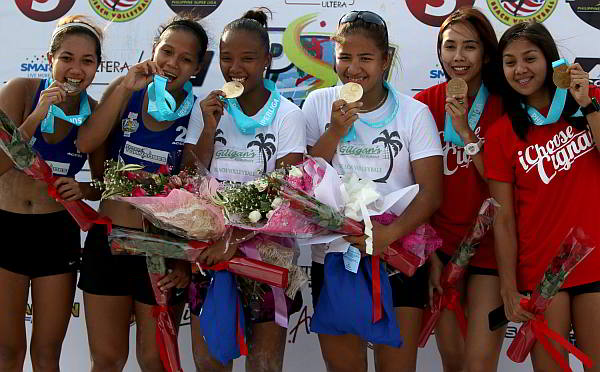 The Giligan’s pair of Norie Jane Diaz and Danika Gendrauli (center) show off their medals after winning the women’s title. With them are the runners-up Foton (pair on the left) and Cignal HD (right pair). (INQUIRER)

Jade Becaldo of SM By the Bay Team B completed the Cebuano sweep in the Philippine SuperLiga Beach Volleyball Challenge Cup as he and Tagum City-native Hachaliah Gilbuena captured the men’s title in a thrilling, 21-17, 23-21 victory over Champion Infinity B on Saturday night at the Sands SM By the Bay.

Becaldo and Gilbuena claimed the crown over Tippy Tigpos, formerly of the University of San Jose-Recoletos (USJ-R), and Marjun Alingasa, just hours after another former Southwestern University (SWU) star Danika Gendrauli powered Gilligan’s to the women’s title with a rousing victory over the Foton Tornadoes.

SM By the Bay B leaned on the points provided by Becaldo in the opener to pull away late, 13-8. Champion Infinity did not do themselves any favors by committing several errors that hastened its fall in the first set, 17-21.

The champions appeared to be headed towards the title as they led, 16-11, but Alingasa came alive and scored on several attacks to tie the score at 21-all.

However, Becaldo hammered a spike home and a net violation by Champion Infinity gave SM By the Bay B the set, the win and the crown.

SM by the Bay actually went through the entire tournament without suffering a single defeat.