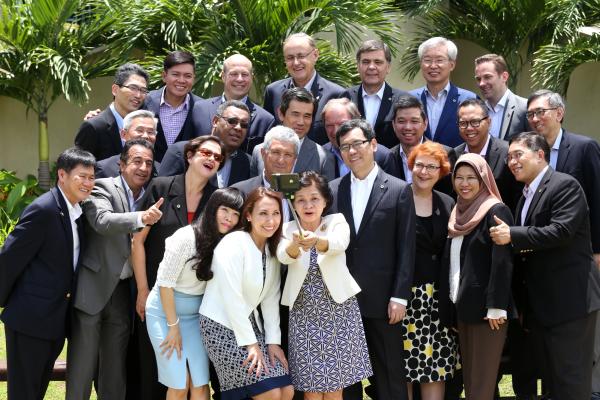 Motorists and commuters in Cebu City are advised to brace for heavy traffic this morning.
Another batch of ministers attending the Asia-Pacific Economic Cooperation (APEC) meetings will tour for

chief of the Cebu City Transportation Office (CCTO).
Tumulak said the problem lies in their pullout of traffic enforcers deployed in intersections along the

Luna Ave.), Salinas Drive and the Veteran’s Drive leading to Marco Polo Plaza Cebu.
Not informed
Passenger jeepneys will also be allowed to pass through Pope John Paul II Ave. starting today.
“We’re expecting heavy traffic (today) during their tour. Aside from the fact that it’s a Monday, we

will also pull out our enforcers,” Tumulak said.
He said he just knew about the city tour for the ministers during yesterday’s meeting at the Joint

Tactical Operations Center based in Parklane Hotel. Tumulak said they were not informed beforehand.
The meeting was attended by representatives of the Department of Tourism (DOT) and the Philippine

National Police (PNP).
Tumulak said the DOT and PNP also didn’t know that CCTO will pull out its personnel and lift the truck

ban today.
Manage traffic
But Tumulak said PNP officials assured them that their personnel will help conduct traffic along the

streets.
“We will also just manage traffic as much as our available personnel can do. The PNP assured us that

Cebu IT Park.
They will also visit the soon-to-open SM Seaside City Complex in the South Road Properties (SRP).
Leave of absence
Between 130 and 150 traffic personnel were deployed along the APEC ceremonial routes during the Third

APEC Senior Officials’ Meeting and related meetings from Aug. 22 to Sept. 6.
All CCTO employees were not allowed to make absences, take days off and leaves.
This is why some personnel scheduled their leaves of absence starting today.
Tumulak said though that CCTO personnel assigned at the Radisson Blu will still be on duty since there

are still meetings there.
There are no more meetings in the three other hotels: Cebu City Marriott Hotel, Waterfront Cebu City

along Pope John Paul II Ave. and Salinas Drive will only be enforced from August 22 to September 5.
But Tumulak clarified that the existing truck ban that is covered by a city ordinance will still be in

covered by the APEC ceremonial route, excluding S. Osmeña Road.
The passenger jeepney rerouting imposed on those who pass along Pope John Paul II Ave. and around SM

City Cebu will be lifted already.
Jeepney passengers were caught unprepared when CCTO implemented the rerouting a couple of days before

the SOM3 meetings started to make it easier for delegates to move from one meeting venue to another.
Traffic flow
Since most meetings will now be held in Lapu-Lapu City, the traffic situation is expected to return to

normal.
But Tumulak said the changes have been helpful for CCTO in efficiently managing traffic flow.
“For our overall assessment, we can consider that the changes made were manageable,” he said.
Tumulak said the start of APEC meetings last August 22 also acted as CCTO’s dry run for the

International Eucharistic Congress (IEC) to be held in Cebu City in January next year.
Assessment
Traffic is a major concern for the IEC since the event will be attended by 15,000 delegates.
Most of the activities will be held in the IEC Pavilion, which is located in the busy street of Pope

John Paul II Ave.
He said since part of the APEC ceremonial route involves the same areas as the IEC, the CCTO has

conducted documentations, studies and kept record of their assessments during APEC.
Tumulak said some of the changes made during APEC can also be implemented for IEC.