No guidelines, no charges against butane outlet owner

No charges will be filed against the homeowner whose eight employees were injured in an explosion caused by leaked butane canisters in Greyhound Subdivision, barangay Kinasang-an Pardo, Cebu City last Tuesday.

“The fire was immediately put out. It did not damage any other establishments and the wounded persons were treated to the hospital and the matter was settled amicably,” said Chief Insp. Rogelio Bongabong Jr., head of the Cebu City Fire Station.

All they could do, he said, was to warn homeowner Amor Pelenia, who has no business permit,  to stop her trade. 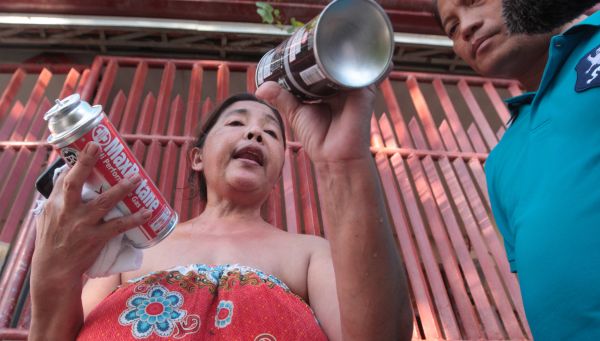 Trader Amor Pelenia engaged shows sample butane canister to reporters at her home in Greyhound Subdivision. She says they refill them with LPG farther away in a mountain barangay or Danao City. (CDN PHOTO/TONEE DESPOJO)

A frustrated Cebu City Mayor Michael Rama called for a crackdown on the use and distribution of butane canisters refilled with LPG.

“It’s banned. The Department of Energy (DOE) already  made  that prohibition. Why is it still proliferating?  Who is in charge?” Rama said.

He ordered a public information campaign about the dangers of using refilled butane canisters, that are manufactured for one-time use only.

“We have to consider that it’s the poor people that’s buying these,” Rama said.

He said the DOE and Department of Trade and Industry (DTI) shoud go after illegal refilling stations.

Refilled butane cannisters are popular as a cheap alternative to LPG and retail for as low as P25 a can.

“The house was confirmed to refill LPG instead of butane gas into containers, that’s why it easily exploded when it leaked,” he said. He said they will investigate the incident.

Tumulak said they told the BFP to  prohibit refilling stations in the city.

“When we went there, the neighbors were frightened and they don’t want the refilling station to continue operating there. The Department of Energy (DOE) will also file a case against them because it’s part of their mandate to regulate power, fuel and gases,” he told reporters.

Tumulak said the city government also prohibits the transport of butane canisters in the city’s roads.

Regional DOE Director Antonio Labios said there are no guidelines for using butane canisters which means that they are disposable and cannot be refilled.

Labios said refilling butane canisters with LPG is dangerous since the tin canisters are not engineered to hold LPG and can easily leak and explode.

The LPG can only be contained in larger metal cylinders sold at higher prices.

Labios said he will send a team to investigate the incident.

He said gas refilling is under their jurisdiction but the use of specific containers is under the Department of Trade and Industry (DTI).

“Before you enter into the liquified petroleum gas (LPG) business, you have to have a certificate of compliance from DOE,” Labios said.

But Labios said the use of containers and specific standards for the containers are under the jurisdiction of DTI and the Bureau of Standards.

Butane canisters are not covered which meant they are disposable and not recyclable, Labios said.

He said he wants the DOE and the DTI to be involved in going after these illegal refilling stations. A brand new 250-gram butane gas canister costs 75.