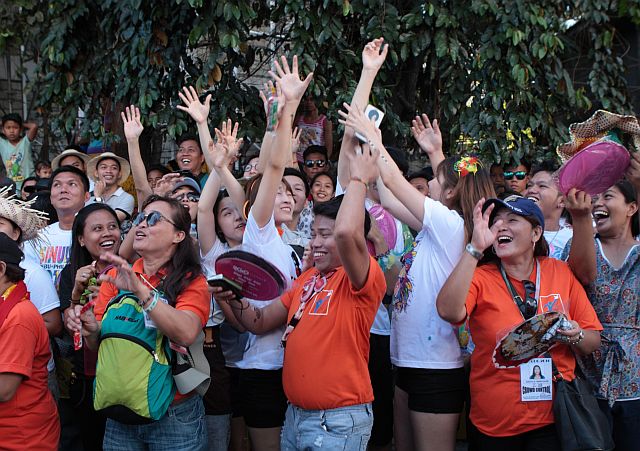 Visitors from Metro Cebu, around the country and from other countries around the world dropped by Cebu City to join residents in celebrating the annual Sinulog yesterday.

Sergio and Osea Herodias of barangay Paknaan, Mandaue City watched the Sinulog Grand Parade outside Camp Sergio Osmeña in Osmeña Boulevard carrying the porcelain Sto. Niño image they inherited from their forefathers in the 1920s.

They later ate a lunch consisting of lechon (roasted pig).

The 63-year-old Herodias said they made a “panata” or vow to watch the Sinulog Grand Parade after receiving a miraculous sign from the Sto. Niño.

He recounted that his son asked the Sto. Niño to give him a job.

Herodias said his son told him the Sto. Niño gave him a sign to indicate that his petition was granted.

The son claimed the Sto. Niño told him that Herodias would be bringing a balloon when he came home.

Herodias said that’s what happened when a young man sold him a red balloon at the Basilica del Sto. Niño.

Herodias said he was surprised when his son ran up to him and asked to be given the balloon.

Herodias later got a job as a second mate in the former Sulpicio Lines.

Herodias is now a ship captain in one of the vessels of Lite Shipping Co. while his wife worked as a nurse in Riyadh, Saudi Arabia for four years. His son is now a

Other visitors like 28-year-old balikbayan Jasmine Gonzales of Los Angeles, said she was with her family when they watched the street dancing competition at General Maxilom Extension.

Gonzales, a native of Argao town, works as an assistant in a printing company in Los Angeles. “Finally, I can now say that I’m home,” she said.

Jessa Espiritu, an I.T. specialist from Batangas, said it was her first time to watch the grand parade after being invited by her friends.

Espiritu said crowd control was a problem since some marshals allowed foreigners to get inside the roped-off areas while she and others weren’t.

“Overall, it was a happy celebration. We will come back if we have time,” she said.

William Michael Smith, a tourist from California, said the Cebuano energy charmed him and plans to return to Cebu City next year.

Peter Park, a South Korean tourist, said he was amazed by the colorful costumes and creative designs of floats at the Sinulog Grand Parade.

“Though it’s crowded but I enjoyed. The costumes are very colorful,” Park said.

Russell White of London agreed and said, “We have also events like this in London but not religious ones and this event is bigger than ours in London.”

Mark Bertz of Denmark and his wife Lerma Bertz said they enjoyed the festivities while Miko Hajto of Poland said he was entertained by the street dancing.

“Cebu is a really an exciting place. Philippines is amazing,” Hajto said.

Jane Logroño of Bohol province said she came to Cebu to support her friend who joined the Cebu Pop Contest.

“This is my first time to witness Sinulog. If given a chance, I would still watch Sinulog next year. Very nice costumes and performances,” Logroño said.

Read Next
Palma calls on faithful to ‘make room’ for Sto. Niño