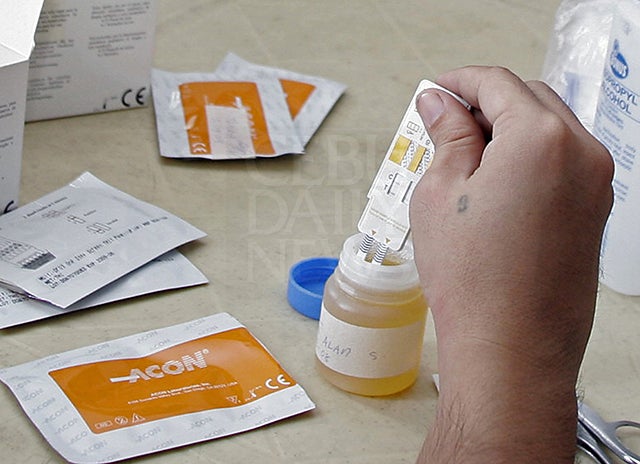 WITHOUT a law requiring its compliance, drug tests among candidates will remain voluntary, the Cebu City Commission on Elections (Comelec) office said yesterday.

“Although conducting drug tests for politicians will help voters get informed choices, it can only be voluntary. If the Cebu City Office on Substance Abuse Prevention (Cosap) wants to do so, it’s their hand, but it won’t be binding to the Comelec,” Cebu City north district officer Marchel Sarno said.

Sarno said they will only require as mandatory those listed in the law.

Regional Director Rene Burdeos of the Department of Interior and Local Government (DILG-7) said drug tests are required under the law from people applying for a license.

Sarno said a Comelec resolution in Dec. 23, 2003 to require candidates to take drug tests was later declared unconstitutional by the Supreme Court (SC).

The same SC decision also declared unconstitutional a section of Republic Act 9165 or the Comprehensive Dangerous Drugs Act of 2002 which also requires the candidates to take drug tests.

But she said city officials seeking reelection are required under a city ordinance to undergo drug tests.

“For officials that will run for reelection, we can subject them to mandatory drug tests. But for those running in the elections but are currently not connected with the government, we can’t require them to take the tests,” she said.

If the candidates present themselves for testing, Utlang said they can conduct the tests but they will determine the schedule.

She said the city ordinance requires at least two drug tests in a year, one mandatory and one random.

Utlang said their office has 2,000 to 3,000 drug testing kits on top of a budget for laboratory confirmatory tests which are in adequate supply  to test the city candidates.

Several candidates in Cebu City are willing to undergo the drug test.

But Chief Supt. Manuel Gaerlan, Police Regional Office (PRO-7) chief, said it would be better if the candidates sign a waiver stating that they are willing to undergo a drug test anytime.

“Drug tests have limitations. In my personal opinion, if I am a candidate I will submit myself to the test, clean. It would be more effective if all candidates would sign a waiver stating they are willing to undergo drug test anytime,” he said.

At the Capitol, the head of the Cebu Provincial Anti-Drug Abuse Commission (Cpadac) isn’t too keen on challenging the province’s candidates to undergo testing.

“I am pretty sure all the candidates are willing to undergo testing,” Cpadac chief Joey Herrera said.

While challenging candidates to submit themselves to testing isn’t “effective,” he said he knows the candidates will abide if the tests were mandatory.

Herrera said the willingness of candidates to undergo testing is already a statement in itself.