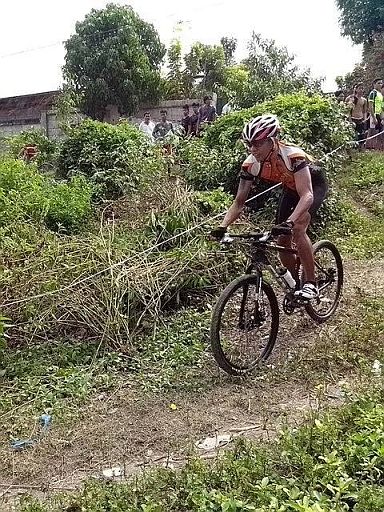 FOR CEBUANO rider Jun Duron, a health problem is not a hindrance in fulfilling a goal.

The 31 year old proved this when he finished fifth in the 30-34 men’s category of the 7-11 Trail Series last Sunday at the Timberland Heights in San Mateo, Rizal.

The Talisay City, Cebu native Duron suffers from asthma, a respiratory condition that causes difficulty in breathing, but this didn’t stop him from performing well in races.

And the good thing about it is that getting into cycling actually helped him improve his asthma problem.

“I am really motivated to bike because of the benefits I get with regards to physical fitness,” Duron said.  “Before, I used to nebulize every day because of asthma. But since I started biking, my asthma attacks lessened. Presently, my attacks are way lesser compared to the time when I didn’t start biking.”

Aside from the physical aspect, Duron also said the sport has helped him mentally. “I also learned to discipline myself that’s why I am able to influence my friends to join me.”

Although the sport is actually quite an expensive one to get into, Duron thinks it can be done by anyone who is really determined.

He shared his struggles before, how he managed to get all the things he needed before being able to join races.

He said he had to ask help from friends Ian Cabrido and Roy Carbonera to come up with a race-ready bike. When he got a bike, he started joining races in 2013.

“My first bike was really for entry level,” he said.

Duron also had to convince his mom it was safe to race, since the former was naturally worried of the effects of cycling to one who suffers from asthma.

But his perseverance and determination allowed him to race. And he even went on to finish 19th in the Asian Mountain Bike Cup (MTB) in Danao City a year after starting the sport.

Duron is looking forward to joining the World University Cycling Championships this March and hopes to make it to the the 2016 Asian Mountain Bike Cup in Japan this May.

Read Next
Mortaflex downs another giant