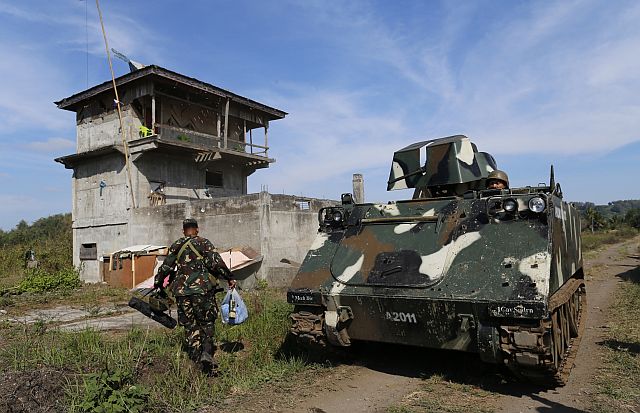 Houses, school buildings, government offices and small business establishments have been destroyed in the fierce battle since Feb. 20.

Brig. Gen. Gerardo Barrientos, 1st Army Division chief, led his men in a flag-raising ceremony in one of the three strongholds of the Maute group, where the houses of group leaders Omar and Abdullah Maute were also burned and destroyed.

“This is my message to them. Never challenge the legitimacy or the rule of law in this part of the region because you will suffer from the forces of the armed forces,” Barrientos said.

“We will not hesitate to use the full force of the army once challenged by any other non law-abiding people,” he added.

The group led an attack on the detachment of the 51st Infantry Battalion in Barangay Bayabao on Feb. 20, killing two soldiers and wounding six others.

The military immediately pursued the group, which reportedly included minors as members.

Barrientos said the first stronghold, located in the village of Ragayan, comprised of  state-funded school facilities and a three-story building – which served as an observation point used by about 30 snipers.

He said the second territory, surrounded by trenches and situated in the nearby village of Puktan, was used as center of the militants’ events.

Barrientos said the last camp was where Omar and Abdullah stayed.

Read Next
Is your body ready for the summer?