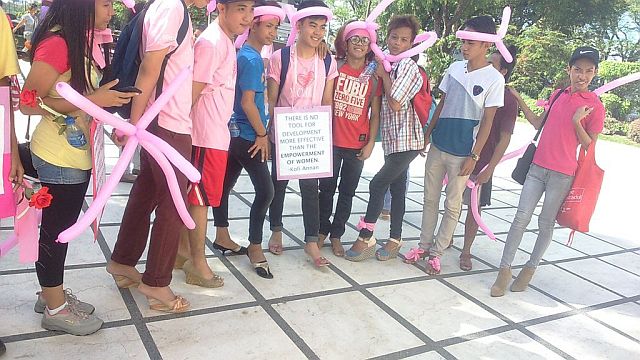 Male participants wear heels during the In Her Shoes event spearheaded by the National Youth Commission to promote women empowerment and equality. (Photo contributed by Sheridan Gajete)

MEN in high heels walked from the Fuente Osmeña Circle to the Capitol to show their support for the National Youth Commission’s (NYC) campaign against sexual harassment and violence against women.

The activity also marked the start of this year’s National Women’s Month, with the theme “Kapakanan ni Juana, isama sa agenda (Include Women in the Agenda),” which according to the Philippine Commission on Women, resonates the call for gender balance in leadership and decision-making positions both in the public and private sector, and capacitating women to reach their ambitions.

Dubbed “In Her Shoes,” the event aimed to focus on the plight of women all over the world and to promote women’s rights, women empowerment and gender equality.

For its Cebu leg, around 150 participants from different sectors, including the Armed Forces of the Philippines, Cebu City Youth Development Commission (CCYDC), Commission on Human Rights (CHR), employees of Cebu City Hall and Cebu Provincial Capitol, and students from STI, Cebu Normal University, and Cebu Institue of Technology-University joined the walk but only 50 were in high heels.

The wearing of heels was meant to show men’s unity with women in promoting gender sensitivity and in rethinking their attitudes towards women.

“It is called ‘In Her Shoes’ to symbolize how the sufferings of our women today – may it be from inequality, violence, or some other forms – are oftentimes hidden behind a front,” said NYC Visayas Cluster head Sheridan Gajete.

“Just like when women are wearing shoes, what society sees on the outside is how good it looks but what couldn’t be seen is the pain, discomfort and issues these women go through and put up with when wearing these heels,” Gajete added.

Some of their members, who asked not to be named for reasons related to protocol, said they attended the event because this is an advocacy of the AFP, given that they have a gender and development office and their number of female members are growing.

“We are here because we want to show our support especially to the women in the AFP so as to empower them, to uplift their morale and uphold their rights as women,” he said.

In addition to wearing high heels, the participants also gave flowers to women passersby during the walk while a band from the Central Command played.

Some of the participants also brought placards with women quotes on them to raise awareness for the cause.

The event culminated with a forum on women empowerment at the Capitol social hall and ended with a commitment signing of the participants.

In her closing remarks, Gajete called on women to be aware of their rights, of what they can do and of what women empowerment truly is.