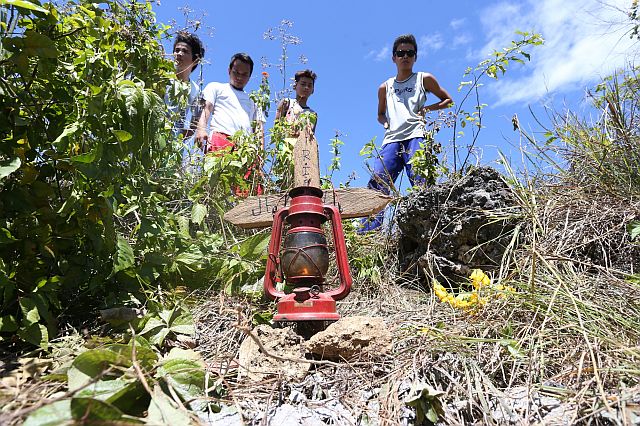 A gas lamp marks the spot where the body of 15-year-old Jezreel Higida was found on Monday. (CDN PHOTO/ JUNJIE MENDOZA)

The municipality of Argao in southern Cebu is in a state of shock over the killing of 15-year-old student Jezreel Tahanlangit Higida.

“We’re just so sad. It’s so shocking. It would have been nice for Argao to make it to the headlines because of positive news, not like this,” Argao Mayor Edsel Galeos told Cebu Daily News over the phone.

Galeos said the municipal government will allot around P30,000 for the girl’s funeral and financial assistance to the family.

A crowd gathered at the Higida residence, which is situated on top of a hill in Sitio Tiposo, Barangay Bulasa yesterday.

The girl’s father, Conrado, 51, silently wept in a corner.

“We opted to wrap her body in plastic since her face was disfigured,” Conrado told Cebu Daily News in Cebuano.

Jezreel, a Grade 8 (not Grade 7 as earlier reported) of Bulasa National High School, was found dead Monday noon, her face bashed with a rock.

She was killed at about 6 a.m. Monday, while she was walking along the three-kilometer route to her school.

The girl was still wearing her underwear and maong shorts under her navy blue plaid skirt. There was also no sign of penetration in her sexual organ.

Conrado vowed to pursue charges against the suspects.

Saraosos accused Relativo of hitting Higida with the rock while Albuera, a cousin of the victim, stood behind Relativo.

SPO4 Albuera said Saraosos will be charged for the minor offense of failure to render assistance to a helpless person.

The three suspects, in separate interviews with CDN at the Argao Police Station, gave different versions of the story.

Relativo, who admitted to the killing, said they merely wanted to scare the girl.

“Kaming tulo ang nagtabang ug patay (All three of us killed the girl),” Relativo said in a radio interview.

He said they had taken illegal drugs and had an overnight drinking session before they committed the crime.

All three were arrested about five hours after Jezreel’s body was discovered on Monday.

Jezreel died within just 10 months of her mother’s death due to kidney failure.

“It pains me to think that gradually, life is taking away my loved ones,” Conrado said in Cebuano.

He said he will bury his daughter on Friday at a public cemetery in Argao.