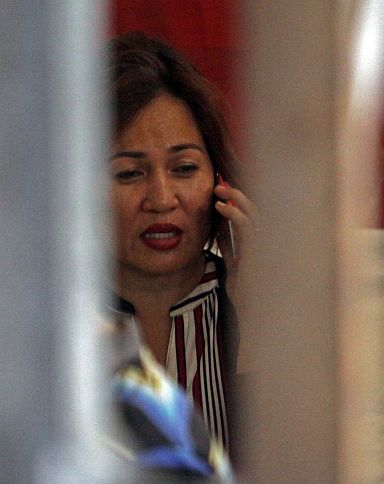 Cebu City Assistant Prosecutor Mary Ann Castro talks to someone on the phone while Inside the Cebu City Medical Center after her arrest Monday night. She is earlier in handcuffs (inset) for allegedly going berserk inside the Regional Special Operation Group 7 office inside Camp Sergio Osmeña. (CDN PHOTO/LITO TECSON)

Hell hath no fury like a woman, especially an assistant prosecutor,  who felt scorned.

“I am the legal wife here and I am being harassed,” Castro was quoted as saying by a radio station shortly after her arrest close to midnight on Monday.

The incident happened at the Regional Special Operations Task Group (RSOG) office in Camp Sergio Osmeña, the police’s Central Visayas  headquarters, where Gregory was detained after she surrendered to the police on Monday afternoon due to pending arrest warrants issued by Judge Glenda Go of the Regional Trial Court Branch 65 in Talisay City for the four counts of Internet libel cases filed against her by Castro.

Gregory, who has two sons aged 2 and 4 with Sanchez and is four months pregnant with their third child, was placed at the RSOG  because of her condition.

But when Castro learned about it, she went to the RSOG  at around 6 p.m. on Monday to demand that Gregory be released to her as she wanted  the latter to be detained at the Talisay City Police Office, which she said has jurisdiction over the libel cases, according to Supt. Rex Derilo, chief of the Regional Intelligence Division of the Police Regional Office in Central Visayas (PRO 7).

Derilo said Castro got angry when the RSOG policemen refused to hand over Gregory to her. She left but  returned at around 10 p.m. with six companions, namely, William Contamina, 27,  a maintenance worker of Azienda Milan, Barangay Lawaan, Talisay City, a subdivision where Castro lives; Leo Suaso, 42, and guard of the same subdivision; Jonas Niñez, driver of habal-habal (motorcycle-for-hire); and Benjielito Lapera, 29, a construction worker; and Gaudiosa Rodrigo, 53; and Hazel Mabuyo, 39,  both from Hacienda Milan.

Castro and her companions allegedly destroyed the padlock to an RSOG office,  after which Castro attacked Gregory. The prosecutor also allegedly bit a policeman who tried to stop her.

It was then that policemen subdued Castro and placed her on handcuffs, along with her companions, said Derilo.

RSOG filed charges of  grave assault, grave coercion, grave oral defamation, and resistance and disobedience to persons in authority against Castro at the Cebu City Prosecutors’ Office at past 5 p.m. yesterday.

Her six alleged cohorts were charged with direct assault and disobedience and resistance to persons in authority.

Hours earlier, at around midnight, Castro was brought to the Cebu City Medical Center for a medical checkup as part of the arrest procedure. It was there that Castro claimed she was not feeling well and wanted to be placed on hospital arrest. But she was discharged past 3 p.m. yesterday after doctors gave her a clean bill of health.

She was immediately brought to the Fuente Police Station for detention but while behind bars, she complained of chest pains, prompting the police to call rescuers from the Emergency Medical Service of the Cebu City government.  But the police decided against bringing her to the hospital as she was previously cleared of any illness by the CCMC doctors.  Instead, she was brought to the Cebu City Prosecutors’ Office for the inquest proceedings.

Due to time constraints, Prosecutor Simaco Labata, to whom the cases against Castro and the other suspects were assigned, decided to continue the inquest proceedings at 10 a.m. today.

In a brief interview at the prosecutors’ office, Castro said she’s not treated well by the police.

“What I experience is basically inhumane  confinement. I can’t bear the stench behind bars, and I have not eaten since last night,” said Castro.

While in custody, Castro also filed a counter suit. Through her lawyers, she and her father Eduardo Castro filed  a petition for habeas corpus before the Cebu RTC,  on the ground that her arrest had no basis. Named respondents in the petition were Derilo, Senior Insp. Romeo Setente,  PO2 Carlo Veloso, Supt. Arnold Palomo, and Senior Insp. Ruel Burlat.

Regional State Prosecutor Fernando Gubalane, meanwhile, said yesterday that he would wait for a formal report on the incident before taking any action on Castro.

Castro, who has been embroiled in high-profile issues since 2005, married Sanchez  in a Muslim ceremony at Harolds Hotel in Cebu City last Aug. 18, a day after

Sanchez was released from a government-run drug rehabilitation center.

Sanchez, who by then has two children with Gregory,  reportedly converted to Islam so he could marry Castro because his previous marriage to another woman (not Gregory) was not annulled.

But only after two months of marriage, Castro and Sanchez parted ways. In October 2015, they accused each other of stealing a brand new sports utility vehicle (SUV) placed under Castro’s name.

While the dispute between the estranged couple continued, Castro filed a libel case against her sister-in-law, Greco’s sister and Cebu Provincial Board Member Gredilca Sanchez, but the case was dismissed for lack of basis last January.

Castro yesterday said she did not expect the police to handcuff her and  accused the RSOG policemen of “protecting a fugitive from justice.”

“This is such a harassment, an absolute trampling of my constitutional rights. And to think, I am a woman. Not only that, I’m the offended party here, and look what they did, I was the one being arrested,” Castro said.

But her four male companions were dumbfounded why they were arrested.

Contamina said he was on his way home after working at Hacienda Milan when Castro requested him to have dinner with her. Castro is known in the subdivision as she is the president of the Hacienda Milan Homeowner’s Association.

“Had we known that she would just use us, we should not have accompanied her,” Contamina said in Cebuano.

Before they tried to forcibly open the locked door of the RSOG, they were told by Castro that it was her office and they had to get her key inside the room.

The four male suspects apologized to the policemen for destroying the door of the RSOG office.

Senior Insp. Ruel Burlat, team inspector of RSOG, affirmed that Castro first arrived at their office at around 6 p.m. and left when they refused to hand Gregory over to her. She returned at around 10 p.m. and destroyed the lock of their office.

“She (Castro) berated us, calling us names like ‘bogo and bolay-og (dumb and stupid).’ She also threatened to go after us, saying she’s a prosecutor,” Burlat said.

He said he and around 10 of his men tried to calm her down and even offered her food and drinks. But when the prosecutor saw Gregory, Castro attacked the woman who was carrying her two-year-old son and holding to another son, a four-year-old.  Castro pulled Gregory’s hair. Because of the force,  Gregory was able to let go of her son who fell on the ground.

“She (Castro) harassed Maricel.  She even poured a cup of (cola)  at Maricel,” he said.

Seeing the commotion, Burlat said they immediately brought Castro out of the room.  But it only made the prosecutor angrier. She kicked the door, slammed its glass window and even got a knife from the office’s kitchen to pry open the door.

Since she could not open the door, Castro allegedly called the four men she brought with her and instructed them to forcibly open the door of the room where Gregory and her two sons were located.

Burlat said he tried to pacify Castro but the prosecutor allegedly bit his left arm. He then ordered his men to arrest Castro and her companions.

Derilo said that while they respected Castro as a prosecutor, they had to do what was proper to protect Gregory who was in their custody.

“Our policemen exercised too much tolerance and patience towards her (Castro). She berated our men and destroyed the door of our office. That’s all right. But to attack our detainee (Gregory), that’s too much already,” said Derilo in a press conference yesterday.

Derilo explained they did not put Gregory behind bars because she is pregnant.

Castro, he said, should respect the police who knew what they were doing.

“Can’t she not respect our policemen? What she did last (Monday) night was a display of grave misconduct and abuse of authority. She was misbehaving and raised her voice. We can accept insults, but if you hurt someone else, step on the rights of others, and destroy our property, that’s a different story,” Derilo said.