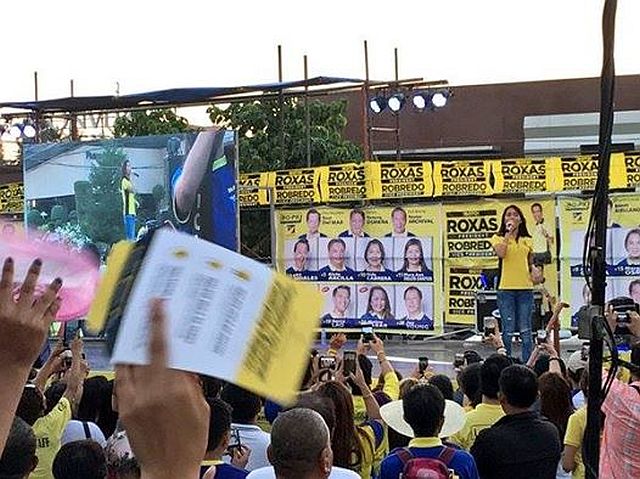 The rally, held at the open grounds near Paseo Arcenas in Banawa, also saw the entire slate of LP’s local ally Bando Osmeña-Pundok Kauswagan (BO-PK), as they introduced themselves to the people.

It was the first time for Tricia Robredo, daughter of  LP vice presidential bet Leni Robredo, to visit Cebu and she said she felt the warmth of the Cebuanos.

“I’m happy to be here. But it’s also bittersweet kasi dito yung huling pinuntahan ng tatay ko before sya namatay  (because this was the last place my father visited before he died),” she told Cebu Daily News.

“(The people’s response) is very warm. My mom had a similar experience. I’m hopeful we could get a Cebuano hold,” she added.

She said she hopes to visit and enjoy Cebu again after the elections.

In her speech , the young Robredo asked for support for her mother and LP standard-bearer  Mar Roxas.

On the other hand, Paolo Roxas, Mar’s son, likened the Mar-Leni tandem to Filipino favorites like “champorado and tuyo” and “kape at pandesal” among others.

Rodrigo Abellanosa (south district) and Raul Del Mar (north district), BO-PK’s congressional bets,  were also there.
Pangako Sa ‘Yo stars Kathryn Bernardo and Daniel Padilla also sang a couple of songs much to the delight of the crowd which immediately started thinning when they finished.

Close to 60 policemen were deployed to secure the area as they expected the crowd to get rowdy because of the celebrities.

Railings were put up around the venue and security guards had to man traffic because people were standing on the street.

The event,  dubbed “Pangako Sa ‘Yo ni Mar and Leni, Daang Matuwid” ended at past 6 p.m.