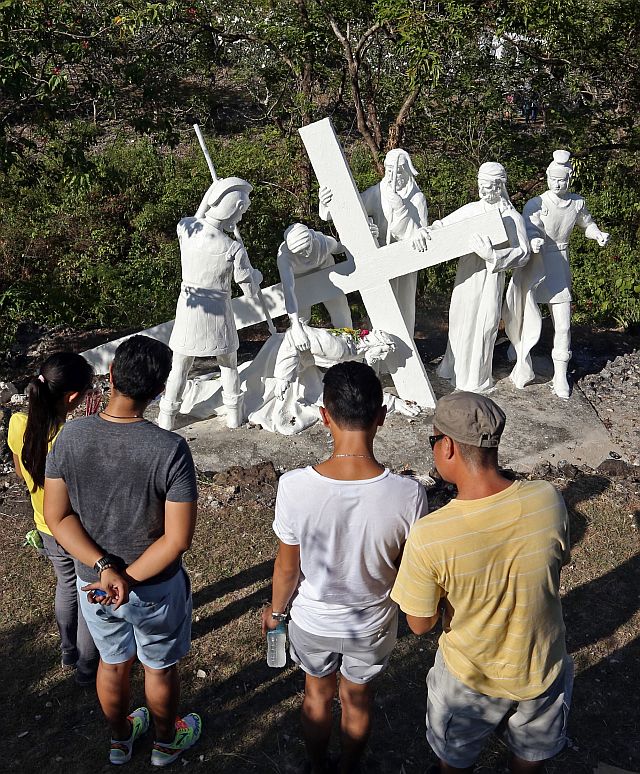 Gemma Natividad, 44, has a Holy Week ritual that  she has  faithfully observed  since she was a young girl and which she has now passed on to her own young children.

Natividad, a devout Catholic who hails from Talisay City, makes sure that a day of the Holy Week is spent climbing up the hills of Barangay Banawa in Cebu City to relive the events leading to Jesus Christ’s crucifixion.

Life-sized statues of Christ in tableaus  depicting the 14 Stations of the Cross dot the 12-hectare hilly terrain that comprises the Celestial Garden, which is owned and operated by the Tanchan Foundation Inc.

Since Palm Sunday, pilgrims like Natividad have been visiting the area, which is commonly called the Good Shepherd since it is located near the convent of the contemplative and apostolic Good Shepherd sisters.

“My parents used to bring me here when I was a kid. I grew up spending several hours praying through the 14 stations of the cross with my parents every Holy Week,” she tells Cebu Daily News.

Natividad has now passed on the tradition to her three young children who, together with husband Niel, have also taken to visiting the Celestial Garden on Holy Week, particularly on Good Friday.

But since they do not want to be part of the thousands expected to flock to the Celestial Gardens on Good Friday, since her youngest child is only 10 months old,  Natividad and her family opted to visit the Garden on Holy Wednesday.

Most pilgrims choose to do the Stations of the Cross or “Via Crucis” in Latin during Good Friday at the Celestial Garden.

Caretakers of the facility note that over the past years, the crowd  of 5,000 or so on the days preceding  Holy Week peaks to about 10,000 on Good Friday.

Alex Romarate, 40, who makes Celestial Garden his Holy Week pilgrimage of choice, is a devotee who is in the area for another reason: he has a stall that sells food to pilgrims.

He notes that visitors flock to the area not only for the Via Crucis but to also enjoy the 180-degree view of Cebu City and the Mactan Channel. 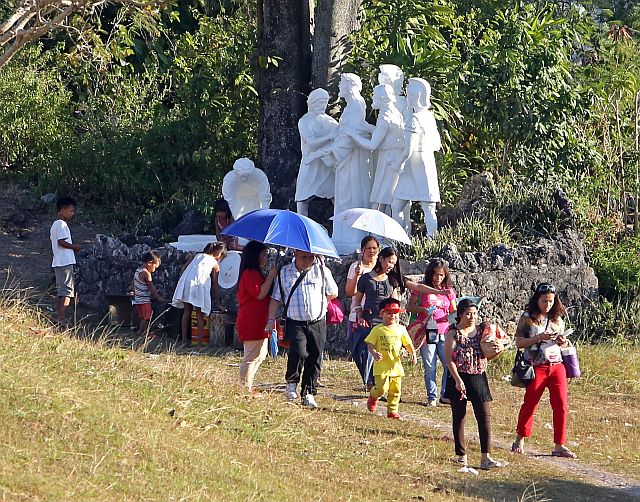 Romarate sells food in the area together with his wife and four children every Maundy Thursday and Good Friday. He has been engaged in the same enterprise since the 1990’s but back then, he says, there were few visitors and some of the few who came were quite rowdy.

In recent years,  much has changed, he notes. Police personnel have also been fielded in the area during Holy Week to ensure a safe and orderly celebration.

For those with no cars and who plan to visit the area, it’s a five-minute, uphill motorcycle ride from Salvador Street along Banawa’s main road. The ride costs P20.

The visitor is greeted by a huge arched gate, similar to Arc de Triomphe in Paris, which will lead you into the facility.

“In thanksgiving to the Almighty God for his countless blessings, this Way of the Cross is humbly offered as a loving reminder for all of us to carry one’s cross and this Celestial Garden is generously shared as a lasting testimony of the loving faith of our large family as we look for the resurrection of the dead and the life of the world to come!” reads a poster put up on the gate by the Tanchan Family.

The facility also has a small cemetery that is more serene than scary since it is surrounded by a lot of greenery: grassy lawns, trees and plants, and animals like goats and cows nearby.

Children also usually play in the fields, flying their kites, riding bikes or just sitting on the grass.

Caretakers don’t collect any fee from people who visit the area. 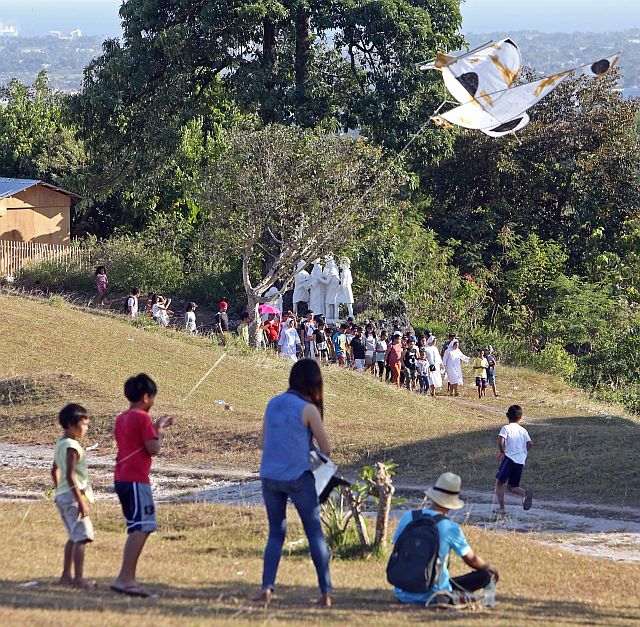 Young boys find time to fly kites as their adult companions concentrate on Lenten reflections while on pilgrimage at the Tanchan Celestial Garden in Banawa, Cebu City. (CDN PHOTO/LITO TECSON)

WAY OF THE CROSS

A typical Via Crucis usually takes from two hours to around four hours, especially since people stop by each station to pray and sing hymns. The Way of the Cross covers almost two kilometers.

When doing the stations of the cross, it’s important to bring a towel, umbrella, water or extra shirts since it could get hot as the  day wears on.

Also during the Holy Week, the contemplative and apostolic Good Shepherd religious in the area offer services like Masses and vigils.

“We are also open to pilgrims who would like to join us for our activities during Holy Week. Most of them just do the Stations of the Cross but we’re always open here,” says a Good Shepherd sister who declines to be named.

On Holy Saturday, the sisters have the Easter vigil that starts at 8 p.m. until Easter Sunday.