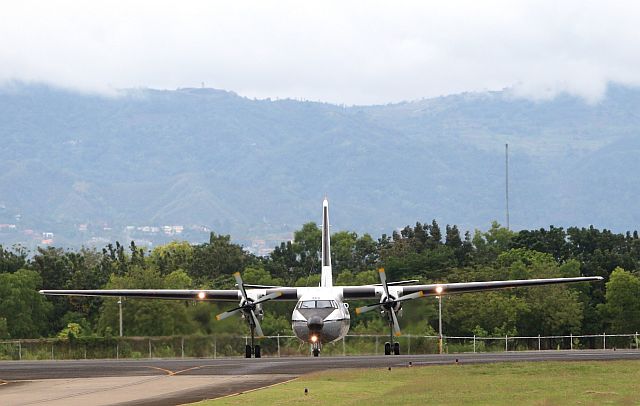 A Philippine Air Force Fokker plane taxies at the Mactan-Cebu International Airport runway as it prepares to take off in this March 2014 photo. (CDN PHOTO/TONEE DESPOJO)

The Mactan-Cebu International Airport Authority (MCIAA) has started laying the groundwork for an additional runway.

Nigel Paul C. Villarete, MCIAA general manager, said its construction is not a priority concern at present but they were preparing for a projected increase in the number of take-offs and landings done in one hour.

“This is a definite long-term direction for MCIAA. In terms of runway capacity, we are still at a little less than half,” Villarete said.

A second runway would be needed when use of the existing runway reaches 80 percent, he added. Construction of a new runway is estimated to last five years.

“It takes time to develop a new runway. We just hope that they will give it the same priority,” he said.

Villarete said he also expects Qatar Airways to resume its services in October or, at latest, in March next year.

The MCIAA has also been in talks with Etihad Airways and Oman Air since 2013 for other possible direct flights to the Middle East.

Still more airlines are expected to come in with the completion of MCIA’s second terminal in 2018, as well as with MCIAA and GMR Megawide Cebu Airport Corp.’s (GMCAC) successful run at the recently concluded Routes Asia 2016.

“I believe our PPP endeavor was of great help. The very transparent transaction and the expected boost of capacity when T-2 will be completed in 2018 placed

Mactan in the airlines’ radar. We will have very exciting times ahead,” Villarete said.

For the next three years, MCIAA will also repaving the runway and service roads as well as develop a better lighting system for the taxiway.

The airport authority is also looking into replacing the six-kilometer stretch of security fence surrounding most of the airport’s airfield.

“We’ve heightened alert levels after Brussels, but it just so happened also that we are already at heightened security level because of Holy Week,” he said.

He assured that MCIA remains safe.

Read Next
More halal-accredited firms, but PH still not ready