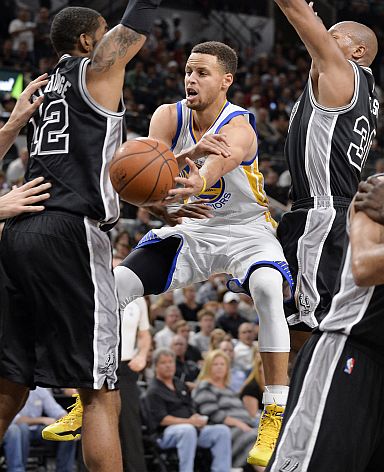 San Antonio — Stephen Curry had 37 points as the Golden State Warriors beat the San Antonio Spurs 92-86 on Sunday night for their 72nd victory, equaling the 1995-96 Chicago Bulls for the season record.

The Warriors will finish the regular season at home against Memphis on Wednesday night.

The Spurs had won 48 consecutive regular-season games at home, including an NBA-record 39 straight to begin this season. Golden State ended a 33-game skid in San Antonio that dated to 1997.

Curry controlled the action with a series of layups when San Antonio’s defense attempted to run him off the 3-point line.

LaMarcus Aldridge had 24 points for San Antonio. The Spurs had not lost at home since March 2015.

The Pacers jumped ahead 17-5 in the first quarter and led by as many as 42 points.

J.J. Redick added 20 points and Blake Griffin had 17 points and 11 rebounds in his best game since returning a week ago from a three-month absence to help the playoff-bound Clippers win their fifth in a row.

Nikola Jokic and Emmanuel Mudiay each had 19 points for Nuggets.

In Houston, James Harden scored 20 of his 40 points in the fourth quarter, and Houston kept its playoff hopes alive with a victory over Los Angeles.

Kobe Bryant, who has just two games left before his retirement, had 35 points for Los Angeles. Jordan Clarkson had 21 points and eight rebounds.

In New York, DeMar DeRozan converted a tiebreaking three-point play with 1:05 left on a night he became Toronto’s No. 2 career scorer, and the Raptors beat New York to stay alive for the No. 1 seed in the Eastern Conference.

DeRozan finished with 27 points to help the Raptors pull within two games of Cleveland with two to play for both teams.

In Washington, Marcin Gortat had 21 points and 13 rebounds and Washington beat Charlotte, damaging the Hornets’ chances to secure home-court advantage in the first round of the playoffs.

Goran Dragic had 19 points for the Heat, and Dwyane Wade had 17 on 7-of-9 shooting in 24 highly efficient minutes. Gerald Green added 15 for

Miami, which outscored Orlando 60-38 in the paint.

Jabari Parker added 15 points and Giannis Antetokounmpo had 14 for the Bucks. Ish Smith led the 76ers with 22 points and Nerlens Noel had 18 points and 13 rebounds.