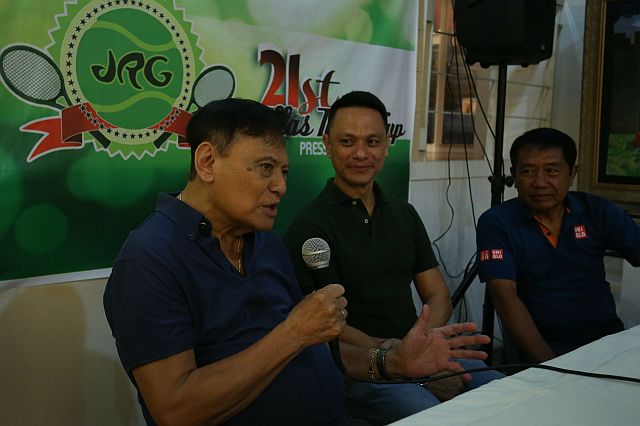 Jose Dodong Gullas (leftmost) takes the floor at the press conference for the 21st Gullas Tennis Cup at the JRG Halad Museum. With him are John Pages and Fritz Tabura. (CDN PHOTO/LITO TECSON)

THE JRG Gullas Tennis Cup will launch its 21st edition next Wednesday at the Consolacion Tennis Club in Consolacion town northern Cebu.

“I am very happy,” said founder Dodong Gullas in a press conference at the JRG Halad Museum yesterday, referring to the extension of the tournament organized for grassroots development.

Tournament manager and decorated coach Fritz Tabura said that they are expecting 200 participants coming from the Visayas and Mindanao regions to join the tournament.

The single-elimination tournament will have boys and girls’ singles categories in the 18-Under, 16-Under, 14-Under and 12-Under age groups. There will also be a 10-under unisex division.

The boys and girls’ doubles competition will have the 18-Under, 14-Under and the 10-under unisex categories.

The JRG Cup is sanctioned by the Philippine Tennis Association (PhilTA).

Tournament organizer John Pages also encouraged young netters to compete in two different categories as it can expose them to other levels of play.

Read Next
WBC to look into result of Petalcorin-Kimweri fight