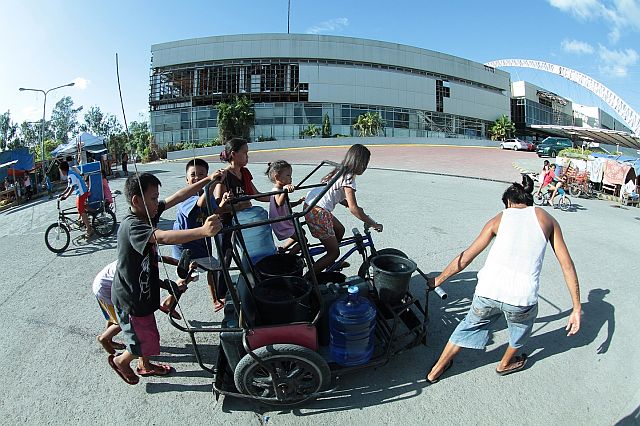 Fire victims from Barangays Guizo and Mantuyong of Mandaue City, who have been given shelter on the grounds of the Cebu International Convention Center (CICC) for over a month now, were asking for more supply of water.

Mandaue City Disaster Risk Reduction Management Office (MCDRRMO) head Felix Suico said that because of the extreme heat experienced over the last month, the demand for water among the fire victims housed in tents at the CICC complex, also located in Barangay Guizo,  has increased.

“Nagkuwang gyud ta sa tubig bisan every day pa atong ration. Tungod init kaayo, grabe ang konsumo sa mga residente. Sige gamit sa tubig (Our water supply is not enough even though we gave them water ration every day. Because it is so hot, the residents here are using more water),” he said.

The city government has been providing about 40,000 liters of water daily to the some 3,268 fire victims who have remained at the  CICC grounds.

The March 12 fire in Barangays Guizo and Mantuyong razed over 2,000 houses and displaced about 2,200 families, or about 11,000 people. Most of the fire victims earlier decided to live with relatives or have found their own places to stay.

Suico said fire trucks from the Mandaue City Fire Department would deliver 16,000 liters of water daily to the fire victims. The rest of the supply included potable water that went through a purifier donated and installed at the evacuation center by the Latter Day Saints Church in Mandaue City; and those donated by groups and schools, such as the University of San Carlos, which delivers 2,000 liters of water a day to the CICC evacuation center.

Suico said they have also asked the fire victims to be mindful of their water supply and guard against wastage, particularly since they have seen a number of children who would randomly open the taps of the water tanks set up on the site and would play with the water.

Despite the heat, however, Suico said there has been no incident of heat-related illnesses among the fire victims.

Meanwhile, the fire victims would have to stay at the evacuation center until June, as the city government has still to finish the reblocking and clearing of the fire site.

Roger Paller, Mandaue City Public Information Officer (PIO), said that once the clearing and reblocking would be completed, the city government would begin the reconstruction of the road network in the area.

He said the city engineering office has cleared the site of debris, but it was still waiting for the promised donation of filling materials from private companies to make the site ready for the reconstruction of both road networks and the houses of the fire victims.

Paller said private construction companies,  such as the PLD Construction and PB Obial Construction, also promised to give asphalt or cement for the site development work.