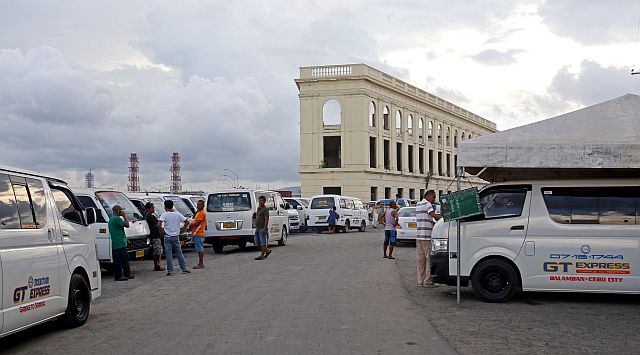 V-HIRE TERMINAL/AUG. 4, 2015: Vehicle for Hire (V-Hire) use the Campaña V-hires wait for passengers in the temporary terminal at the Compania Maritima ground in this August 2015 file photo. (CDN PHOTO/JUNJIE MENDOZA)

The City Administrator has ordered the setting up of steel railings at the Old Compania Maritima grounds starting today to prevent the vans-for-hire (V-hires) from operating at the temporary terminal.

City Administrator Lucelle Mercado said in a phone interview yesterday that she gave the order after the south-bound V-hires, which were scheduled to move yesterday to the new temporary terminal at a lot at the SM Seaside City, did not transfer to the new terminal location.

Several passengers, who traveled to the new terminal location, were surprised to see no V-hires there.

“Wala man mi nadawat nga order gikan sa mayor (We did not receive any order from the mayor), ” said Winnie Jaranilla, vice president of the V-hire drivers of Toledo-Cebu route, when asked about the reason for not transferring to the SM Seaside City terminal.

Mercado, however, said that the V-hire drivers were already informed about the move in a meeting.

“Many drivers attended the meeting and each route had representatives,” Mercado said.

“Nakadungog mi nga pabalhinon daw mi pero wa man namo maistorya ang mayor. Ang mayor gyud ang makig-atubang namo. Makigsulti jud mi niya (We heard about the transfer, but we did not talk with the mayor. We want to see the mayor and to talk to him),” Jaranilla said.

Mayor Michael Rama, who was at yesterday’s Mayoralty Forum organized by the Cebu Chamber of Commerce and Industry at the Marco Polo Hotel, when asked about the drivers wanting to talk to him, said he would meet with them.

He, however, did not give any details but only ordered his staff to schedule a meeting with the drivers.

Jaranilla said that there were meetings but he chose not attend all of them because it was not the mayor who talked to them.

The V-hire drivers, who were operating at the Old Compania Maritima grounds for 10 months, were ordered to transfer starting April 27 to the SM Seaside terminal for safety purposes because of the road-concreting project of the Department of Public Works and Highways in the area.

But Jaranilla and other drivers considered the move an “additional burden” to them despite the safety purposes that the city administrator wanted to address.

Mercado, however, said that the transfer is inevitable since the terminal is only temporary.

Mercado said that all the drivers’ sentiments and objections were already discussed during their last meeting with them.

An area of the SM Seaside parking lot was provided to serve as the new V-hire terminal.