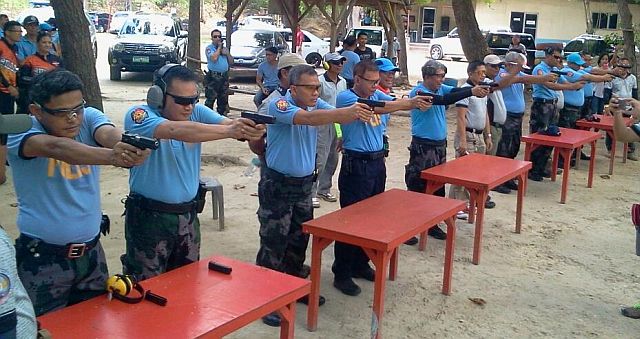 PRO-7 officials refresh their shooting skills in preparation for the May 9 elections by participating in the S.A.F.E. 2016 Shoot Fest at the CPRA firing range in Barangay Pusok, Lapu-Lapu City. (Story on page 27.) (CDN PHOTO/NORMAN MENDOZA)

Aside from the eight areas in Cebu recently declared by the Commission on Elections (Comelec) as election hotspots, police are also monitoring five other towns with reported cases of illegal activities that may threaten the peaceful conduct of the elections on May 9.

Cebu Provincial Police Office (CPPO) Director Clifford Gairanod said reports of vote-buying and alleged sightings of goons in some areas have reached his office, prompting him to dispatch police intelligence personnel to the towns of Asturias and Moalboal in mainland Cebu and all three towns of Bantayan Island, namely, Sta. Fe, Madridejos and Bantayan.

“These are still all for confirmation,” Gairanod said in a press conference yesterday.

He said covert operatives are now in these towns for tight “monitoring” of the situation as the elections draw closer.

Bantayan Mayor Ian Christopher Escario, in a separate interview, denied any practice of vote-buying in his town.

He said police should not speculate about this, especially as it is peak travel season. Bantayan is a popular tourist destination because of its white sandy beaches.

“All hotels and resorts on the island are fully booked. If reports like this come out, it’s going to be an economic disaster,” Escario said.

Asturias Mayor Alan Adlawan, in another phone interview, expressed surprise upon learning from CDN that his town was being monitored by police for alleged presence of goons.

“Wala may gubot diri. Ug kon vote-buying man gani, sayo pa kaayo ron (There is no violence here. And if we talk about vote-buying, it’s way too early for that),” he said.

Gairanod said he received reports of vote-buying on Bantayan Island and Moalboal. In Asturias and Tuburan, former rebels are allegedly being hired as goons by local candidates.

Tuburan, located in the 3rd district of Cebu, is among the eight areas in the province earlier identified by Comelec as Election Watchlist Areas (EWAs).

Others in the list are three in the 4th congressional district, namely Bogo City and the towns of Medellin and Daanbantayan; two in the 5th district — Carmen and San Francisco on Camotes Islands; Dumanjug in the 7th district; and San Fernando in the first district.

Gairanod said he sent a team to Camotes Islands after a strafing incident in San Francisco that earned the town a spot in EWAs.

“In the coming days, we will send more teams to monitor the (alleged) presence of goons in these places,” said Gairanod as PNP still has to confirm the reports.

In the 2013 local elections, police recommended the inclusion in the EWAs the cities of Bogo, Danao, Carcar and Lapu-Lapu and the towns of Sogod, Barili, San Fernando, Daanbantayan, Tuburan, Sta. Fe, Pinamungajan, Tabogon and Dumanjug.

In order to maintain the conduct of peaceful and orderly elections on May 9, the CPPO would need an augmentation of about 1,000 personnel coming from the regional police office and at least 300 from the Armed Forces of the Philippines (AFP).

At least 144 police trainees, augmentation forces from Cebu City, Mandaue City and Lapu-Lapu City will also be deployed in the province on Election Day.

A total of 2,810 personnel are needed to secure polling centers and treasury offices, conduct station duty, watch over vital installations such as power and communication towers, and serve as members of monitoring teams.

At present, the CPPO’s actual strength is only 1,770. Its total strength is 1,851, but 27 are either on sick leave, suspended, or waiting for retirement while 54 will be doing other forms of fieldwork on Election Day.

Aside from CPPO personnel securing voting centers, there will also be Quick Response Teams (QRT) from police augmentation forces and members of the army patrolling the vicinity with concentration on EWAs.

There are 1,047 voting centers in the province and 4,066 polling precincts, excluding those in Cebu City. Cebu province is home to at least 2.7 million voters.

Gairanod said that towns are clustered by district and “reaction forces” were sent Wednesday to help local police conduct anti-criminality campaigns in their areas.

Each cluster has groups with around 15 members on standby which may serve as augmentation forces to other clusters if needed.
The CPPO will also designate supervisors for each EWA as well as for Bantayan and Camotes Islands and the northern and southern parts of Cebu.

While the police office is faced with limited manpower at present, Gairanod said it will be enough on Election Day.

“We will just make do with what we have,” said Gairanod.

Meanwhile, Comelec Central Visayas Director Jose Nick Mendros said all 4,066 Vote Counting Machines (VCM), one for each polling precinct and additional 55 units for each municipality, have been delivered and are stored in a warehouse in Cebu City.

Each VCM comes equipped with a 12-kilowatt battery which lasts up to 18 hours in case of power outages.

They were expecting the official ballots to arrive today, he said.

All election paraphernalia classified as non-accountable forms such as posters indicating cluster precinct numbers, paper seal, certificate of votes, official receipt of election returns, envelopes and other supplies have been delivered to local treasury offices as well.

“We are now on the home stretch. If this were a baseball game, we are now in third base,” said Mendros.

He added that they were also waiting for the delivery of generator sets for eight island barangays in Cebu without access to stable power this weekend or the first week of May.

“In case it won’t be delivered on time, the local election officer is authorized to rent generator sets,” said Mendros.

Villages with polling precincts that do not have access to electricity include Carnaza (Carnaza Island) and Logon (Malapascua Island) in Daanbantayan, Botigues, Hilotongan and Doong in Bantayan, and the islands of Caubian, Caohagan and Pangan-an in Lapu-Lapu City.

Meanwhile, acting Cebu Provincial Fire Marshall Ronaldo Orbeta said all fire stations will be on red alert on May 9.

In preparation, he said all city and municipal fire marshalls have been asked to inspect all voting precincts.

Fourteen out of 53 local government units in Cebu do not have fire stations.