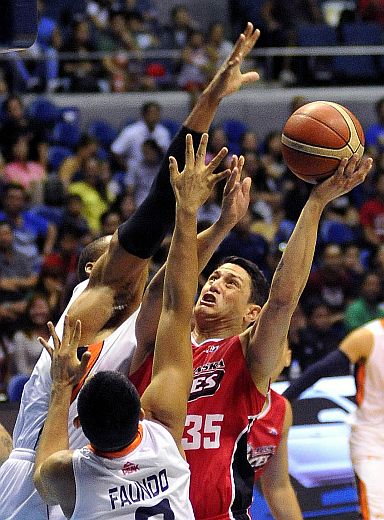 Tony dela Cruz of Alaska struggles to put up a shot against Meralco’s Cris Newsome and Bryan Faundo in Game 4 of their semis encounter. (INQUIRER)

Tougher defensively and a lot sharper on the other end, Meralco played with a lot of sting last night and took its best-of-five Oppo PBA Commissioner’s Cup Final Four series with Alaska to a decider after an 86-70 win at Smart Araneta Coliseum.

What started out as a slow-paced, deliberate type of game, the Bolts used one scorching run to end the third period before totally breaking away in the fourth to keep alive aspirations of making a title series for the first time in franchise history.

Game 5 is set tomorrow at 7 p.m. also at the fabled Big Dome floor in Cubao, with Meralco obviously having all the momentum that it needs and Alaska going back to the drawing board to see what went wrong.

“We have to remain hungry,” Meralco’s Norman Black, no stranger to winning titles with two other teams before taking on the assignment with the Bolts, said of what they need to do in the rubber match, where the winner advances to face finalist in waiting Rain or Shine.

The Bolts tried breaking away early in the third before the Aces crept to within 52-54 with just over a minute remaining in the quarter.

But Meralco closed out with an 8-0 tear, highlighted by a Jarred Dillinger triple from beyond half court to beat the clock which eventually sent the Bolts on their way to their first lopsided win of the series.

“We lived another day,” Black, who rued his Bolts’ lack of effort in a one-sided Game 3 loss, said. “We got back down to basics as far as our defense is concerned.”

Chris Newsome, scoreless in the first three quarters, hit seven points in a 15-4 run to open up the fourth as the Bolts broke the Aces’ collective backs by posting a 77-56 lead heading into the final 7:02.

The defense that Black mentioned held the Aces scoreless for a four-minute span during that run, as Alaska was stuck with just four points in the fourth until Rob Dozier made a charity with 6:16 remaining.

“Now that we’re here, we’ll try to win Game 5,” Black said. “At this point in the season, why worry about what happened before.”

Dillinger, also the Game 2 hero, paced all Meralco shooters with 17 points, with import Arinze Onuaku scoring 16 that went with the same number of rebounds on top of five blocks in a dominating effort inside the paint.

“Arinze had a lot of energy today,” Black said. “Unlike in Game 3, where we basically died out in the second half.”

Dozier led Alaska with 18 points, while Calvin Abueva, the leading contender for the Player of the Conference award, had just 10 in his least productive game of the series.