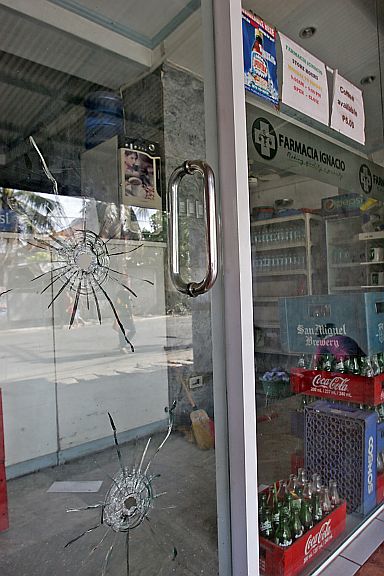 No one was hurt in the early morning attack, but the glass walls of the Farmacia Ignacio, which is owned by Inayawan Barangay Captain Lotlot Ignacio-Soon, was peppered with bullets.

Recla, however, said that although Soon is running for Cebu City councilor this election, there is still no evidence that the attack is election related, although they are not discounting the possibility.

But she said personal grudge is now the focus of their investigation as the perpetrator has been identified by a witness.

“He (the gunman) was not wearing any mask. After firing at the pharmacy, the gunman ran to an SUV parked nearby,” the witness told police in Cebuano.

“We are conducting hot pursuit operations against the suspect whom we learned had a past personal grudge against Soon,” Recla said.

But Soon said she believed that the attack was politically motivated especially since this was the second strafing attack involving her in a matter of days.

Soon was referring to last Friday’s strafing of a Barangay Inayawan-owned multicab parked in front of the barangay hall by unidentified gunmen.

She also questioned why there were no tanods in the area (Barangay Tejero) despite its distance from the barangay hall.

“Dawaton lang unta nila ang kapildihan kung mapildi man sila. Hulaton na lang nila ang May 9. Dili lang ipaagi sa panghadlok (They should just accept defeat if they will be defeated. They should just wait for May 9, and they should not harass their rivals),” said Soon, who refused to name names.

Aside from the pharmacy damage, the gunman also hit the Toyota Fortuner owned by Soon’s sister Liezel Ignacio Fernandez which was parked in front of the pharmacy at the time of the attack. Two bullet holes were found at the left side and back side of the SUV.

Bullet holes were also found at the Internet cafe owned by her sister located beside the Farmacia Ignacio.

Recla said seven empty shells of a 9mm caliber pistol were recovered from the area.

According to police investigation, at 1:45 a.m. yesterday, a slim-built man of around 18 to 23 years old passed by the area and fired at the pharmacy.

Recla said the gunman had a cohort who was waiting a few meters away on the getaway motorcycle.

She also said that there was another SUV parked nearby, believed to be a lookout.

Recla said the assailant has been a known “toughie” in Barangay Inayawan and has once or twice argued with Soon.

In a separate interview, Chief Supt. Patrocinio Comendador, director of the Police Regional Office Central Visayas (PRO 7), said they will wait for the results and recommendation of the Cebu City Police Office (CCPO) about the incident and to determine whether or not to place Cebu City under the election watchlist.

“We cannot speculate at this time. But what we can see, this can only be a form of harassment,” said Comendador.

Comendador said that if Cebu City wouldn’t be declared as among areas in the election watchlist, the security will still be tight for the May 9 polls to maintain peace and order.

Rama also called CCPO to arrest whoever is behind the incident.

“I don’t have the police report yet. But I am really wishing that it’s not connected with politics. Precisely, it’s become incumbent now for the chief of police and me exercising operation, supervision and control, to bring whoever is responsible,” he said.

Rama said he was glad that no one was hurt in the attack.

“But still, it’s a serious attack to all of us who are peace loving. That’s precisely the reason why I want that seriously looked into. The police having already all of these mobility,” Rama said, referring to the new police vehicles the city distributed to the local police recently.

Soon said that they will request for a parallel investigation to be conducted by the National Bureau of Investigation (NBI).

Meanwhile, BO-PK founder and former mayor Tomas Osmeña said he just learned about the incident after CDN tried to get his comment about it.

“My first reaction is that is drama ni Rama. There’s nothing else to say. I haven’t even heard about it till you asked me,” Osmeña added.