Gorilla shot dead to save child 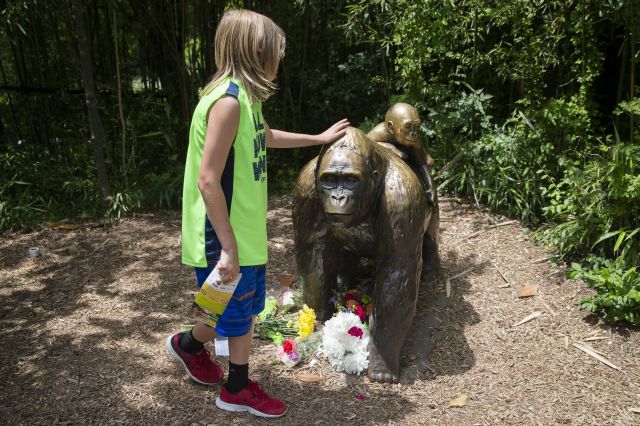 A child touches the head of a gorilla statue where flowers have been placed outside the Gorilla World exhibit at the Cincinnati Zoo & Botanical Garden. Harambe, the 400-pound gorilla, was shot dead by zoo officials.(AP)

Cincinnati — Panicked zoo visitors watched helplessly and shouted, “Stay calm!” while one woman yelled, “Mommy loves you!” as a 400-pound-plus gorilla loomed over a 4-year-old boy who had fallen into a shallow moat at the Cincinnati Zoo.

The boy sat still in the water, looking up at the gorilla as the animal touched the child’s hand and back. At one point, it looked as though the gorilla helped the youngster stand up.

Two witnesses said they thought the gorilla was trying to protect the boy at first before getting spooked by the screams of onlookers. The animal then picked the child up out of the moat and dragged him to another spot inside the exhibit, zoo officials said.

The child, whose name was not released, was discharged from Cincinnati Children’s Hospital Medical Center on Saturday night, hours after the fall.

His family said in a statement Sunday that the boy was home and doing fine.

“We extend our heartfelt thanks for the quick action by the Cincinnati Zoo staff. We know that this was a very difficult decision for them, and that they are grieving the loss of their gorilla,” the family said.

Zoo Director Thane Maynard said the gorilla didn’t appear to be attacking the child but was “an extremely strong” animal in an agitated situation. He said tranquilizing the gorilla wouldn’t have knocked it out immediately, leaving the boy in danger.

“They made a tough choice and they made the right choice because they saved that little boy’s life,” Maynard said.

Zoo officials said the 4-year-old climbed through a barrier at the Gorilla World exhibit and dropped 15 feet into the moat Saturday afternoon. He was in there for about 10 minutes. Two female gorillas also were in the enclosure.

The two females complied with calls from zoo staff to leave the exhibit, but Harambe stayed, Maynard said.

Witness Kim O’Connor said she heard the boy say he wanted to get in the water with the gorillas. She said the boy’s mother was with several other young children.

O’Connor shared video she and her family recorded of the boy and Harambe. The two appear in a corner of the exhibit while visitors yell, “Somebody call the zoo!” and “Mommy’s right here!” The station did not air portions of the video showing the gorilla dragging the boy.

Another woman said that just before the boy fell, she saw him in the bushes beyond a fence around the exhibit.

“I tried to grab for him. I started yelling at him to come back,” Brittany Nicely told The Cincinnati Enquirer.

“Everybody started screaming and going crazy. It happened so fast.”

Zoo staff cleared the area and visitors heard gunfire a few minutes later. Firefighters then rushed into the enclosure and picked up the boy.

Lt. Steve Saunders, a Cincinnati police spokesman, said there are no plans to charge the parents.

Animal rights group People for the Ethical Treatment of Animals said the zoo should have had a second barrier around the exhibit.

“Even under the ‘best’ circumstances, captivity is never acceptable for gorillas or other primates, and in cases like this, it’s even deadly,” PETA said.

Read Next
HK activist beaten by police sentenced to prison