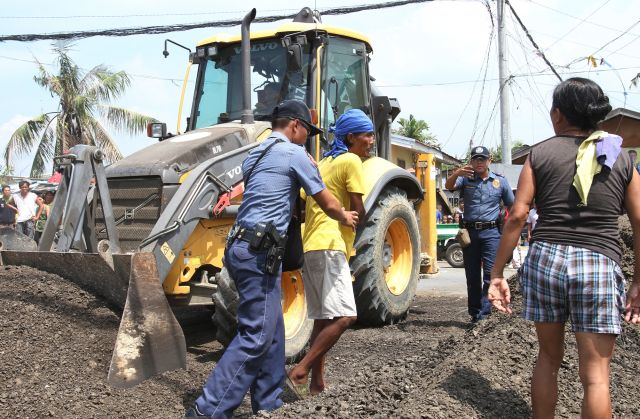 A police officer (left) prevents a fire victim from intervening in the leveling of the dumped filling materials by a bulldozer at the fire site in preparation for the reblocking work. (CDN PHOTO/JUNJIE MENDOZA)

Tension rose on the first day of the backfilling operation for the site development in Barangays Guizo and Mantuyong in Mandaue City yesterday, after some residents who are opposed to the project tried to stop the operation.

However, at least 40 policemen, securing the Mandaue personnel working in the area, were able to control the small crowd from intervening, allowing the backfilling work to continue.

A small crowd made up of residents started to gather in the area when the trucks with filling materials and heavy equipment arrived because they thought that the demolition of their burned houses and makeshift shelters will start.

The tension went a notch higher at past 9 a.m. after one of the Mandaue personnel removed the sign of the Federation of Mandaue City Urban Poor Inc. (Fedmacupi) placed at the barangay hall in front of the fire site with the words stating opposition to the reblocking of the 9.2-hectare lot.

“Harassment na inyong gibuhat, inyong giyatakan among katungod (What you are doing is harassment. You are violating our rights),” shouted Ann Marie Paquibot, a Fedmacupi member and a resident of the area, to the policemen and Mandaue workers in the area.

Norma Garbo, Fedmacupi president, and Rosalinda Rello, the urban poor group’s board member, tried to convince lawyer John Eddu Ibañez of the City Legal Office, who was at the fire site yesterday, to stop the operation and even showed him the deed of donation of the 9.2-hectare lot.

Ibañez, however, told them that the operation cannot be stopped since it is already part of the memorandum of agreement.

He also highlighted the part of the deed of donation, stating that each beneficiary shall be entitled to one lot, depending on the area available for distribution after deducting the spaces intended for roads, recreation and playground.

He said each lot shall be distributed for free.

While the backfilling operations were ongoing, some residents chanted “ihunong” (stop the operation) but the Mandaue personnel continued their work.

Rello said that they didn’t have an agreement with the local government on the backfilling of the area.

She also said that they were also against the road network plan of the city for the fire site because it will take a big chunk of some of the residents’ lots.

Ibañez, however, said since March they had been inviting the leaders and members of homeowners associations to discuss what the city government plans to do in the area.

Ibañez said they had sent 20 notices to Fedmacupi and those homeowners associations, who didn’t attend the meetings but are now complaining that there was no coordination with them.

He said yesterday was just a backfilling operation and not a demolition aimed at reblocking the area.

As for the road network, he said this is to give way for firetrucks and ambulances in case of emergency.

He also clarified that the residents can still go back to their lot once the site development is done.