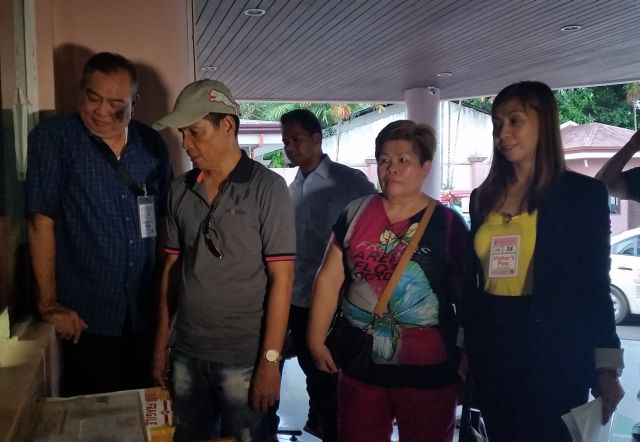 The lawyers of Labangon Councilman Rodolfo Tabasa yesterday made good on their threat to file a string of charges against Cebu City Acting Mayor Margarita “Margot” Osmeña and seven other City Hall employees and policemen over the “citizen’s arrest” of Tabasa Friday evening.

Assisted by lawyer Ernesto Rama, Tabasa requested the Office of the Ombudsman in the Visayas to hold the respondents liable for “unlawful arrest, kidnapping, serious illegal detention, and appropriate administrative offenses.”

He filed an affidavit-complaint before the Visayas Ombudsman to support his accusations against Osmeña, Ronald Malacora, Kenneth Amar, Rafael Cabonelas Jr. — all of the City Hall’s General Services Office (GSO) — and four unidentified police officers who accompanied the GSO employees during his arrest in his residence in Barangay Labangon at around 9 p.m. last Friday.

“I felt so scared and my rights were violated. I felt dizzy and my heart palpitated so fast (when I was placed under arrest),” said Tabasa in his affidavit.

Councilor-elect Jocelyn Pesquera considered herself a witness in the case. She said Amar admitted to her, hours after Tabasa was arrested, that it was Osmeña and Malacora who ordered them to arrest the councilman over an unreturned city-owned Toyota Hilux.

“He (Amar) really mentioned Malacora and the acting mayor as the persons who instructed him to arrest Councilor Tabasa,” said Pesquera, who along with Lahug Barangay Councilor Ramil Ayuman, accompanied Tabasa and the latter’s wife in filing the case before the anti-graft office yesterday afternoon.

Osmeña for her part said she cannot stop them from filing a case against her.

“Okay, lang. Let them. Whatever we need to do, the City has to do, we will do. All within the bounds of law,” Osmeña said.

According to Osmeña, the number of barangay officials who refuse to return their vehicles has gotten smaller.

“How many left? Twelve? What does it mean, that the others already agree (to return their issued vehicles)?” the acting mayor said.

According to Malacora, GSO head, there are only 9 remaining barangays, out of the 47 barangays whose officials initially refused to return their city-issued vehicles. These are Apas, Basak-Pardo, Buot, Kamagayan, Sambag 1, Tagbao, Tinago and Tisa.

Acting Cebu City Legal Officer Eleodoro Diaz called the charges baseless. In a text message to Cebu Daily News, Diaz said, “We know that it has no legal and factual basis. We will defend the interest of the Cebu City government and its officials.”

He declined to comment further until they will receive a subpoena to answer the charge.
Citizen’s Arrest

In his affidavit, Tabasa said he was at his neighbor’s residence at around 8 p.m. last Friday when he was informed that policemen and civilians were looking for him.

He said he went to his house where he was placed under “citizen’s arrest” by the GSO employees at around 9 p.m. Friday.

“At that moment, I was told to go with them to the City Intelligence Branch (CIB) in Gorordo Avenue but I vehemently refused,” Tabasa said.

He said he was hesitant because neither the GSO employees nor the policemen presented a warrant of arrest issued by the court.

“They forcibly brought me to a waiting vehicle. I was so scared for my life. I did not know where they were going to bring me,” he claimed in his statement.

While inside the vehicle, Tabasa said there were policemen, one of whom was holding an Armalite.

He said he was eventually brought to the CIB office at the Cebu City Police Office where he was told that he was under arrest for failing to return a government-owned vehicle.

Tabasa said lawyers from Team Rama, the political party he’s affiliated with, arrived and demanded from the police any document as basis for his arrest.

Osmeña had earlier caused the entry into the police blotter the names of the barangay officials who refused to return their city-issued vehicles with a complaint for carnapping.

After that he was no longer allowed to go home, Tabasa said.

“I felt so stressed out, dazed. I was not able to sleep. I felt so violated. I cannot understand why am I detained when I did nothing wrong and that there was no case filed against me,” he said.

In his complaint filed before the Ombudsman, Tabasa said the service vehicle was issued to him by suspended Cebu City Mayor Michael Rama in 2012 for “emergency purposes” and as aid to his official functions as councilman of Labangon.

He said he did not receive the memorandum from Acting City Mayor Osmeña, directing him to return the service vehicle to the city government.

“I did not receive nor was being served with notice ordering me to return the service vehicle issued to me by the city government,” he said.

On Saturday, his lawyers led by Councilor-elect Joey Daluz III filed a petition for his release in court.

Judge Pamela Baring-Uy of the Municipal Trial Court in Cities Branch 6, who immediately acted upon the petition, ordered Tabasa’s release under recognizance of his lawyers, saying the police failed to file appropriate charges against Tabasa within the reglementary period.

Under the rules, Uy said the arresting officers should deliver the living person of Rodolfo Tabasa to the concerned authorities within the period of 12 hours from arrest for proper disposition.

Tabasa was released past 3 p.m. last Saturday. Although he wasn’t placed behind bars, he was under police custody for 19 hours.

Acting Cebu City Attorney Eleodoro Diaz III on Monday filed a complaint against Tabasa for “refusing to return a property upon demand,” a violation of Article 221 of the Revised Penal Code.

He, however, did not appear during the inquest proceedings at the Cebu City Prosecutors’ Office yesterday afternoon.

Councilor-elect Daluz, a lawyer, appeared on Tabasa’s behalf and requested the handling prosecutor to give them enough time to submit their counter-affidavit.

Prosecutor Rhodna Bacatan granted Tabasa’s plea and gave him 10 days or until June 23 to submit his counter-affidavit to refute the allegations.

Tabasa had returned his vehicle, a Toyota Hilux, last Monday morning at the Sugbo Building grounds where all the other vehicles are parked.

Meanwhile, of the 548 vehicles recalled by the city, 200 have been reissued by Osmeña as of yesterday.

The GSO records show that 197 vehicles came from the barangays while 351 were from the different departments in city hall.

“As they (barangay officials) come in, we will look at what they need. Like many of them will say they need it for the barangay to help its people, then the multi cabs can accommodate more,” Osmeña said.

She added that most of the vehicles she reissued to the barangays were buses, multicabs and the like, as these are the vehicles that are most needed. She has not yet reissued the high-end cars such as Hilux and Strada among others.

“They need it for emergency to bring whatever; the multicab can bring more so we give them whatever is appropriate for the needs that they state,” she added.

For now, she said, department heads can use a vehicle but they still have RATA.

“I also found out today in the depot that there are motorcycles that gas up there and bring a container (carrying diesel),” she said.

She said that the city really needs an inventory to find out which vehicles are no longer usable because these still have fuel allocation which could be taken for personal use.

Read Next
Settlers at Osmeña Shrine yield to demolition team