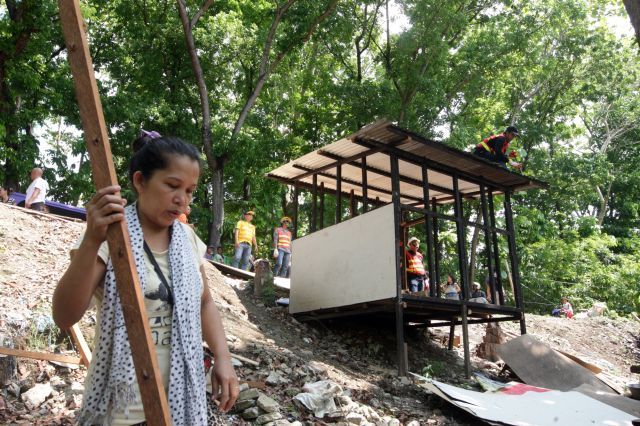 Despite their pleas, settlers at the Osmeña shrine had no choice but to yield to City Hall’s demolition team. (CDN PHOTO/TONEE DESPOJO)

Regret was written all over Belen Abrigana’s face as she saw personnel of Cebu City Hall’s Prevention, Restoration, Order, Beautification and Enhancement (Probe) team arrive at their house near the Osmeña Shrine yesterday.

“Sakit kaayo sa buot makita nimo ang balay gub-on. Hangyo unta mi nila, kami na lang moguba aron magamit pa among materyales (It pained me to watch my house being demolished. That’s why I asked them if we can demolish our house, so we can still use the materials),” she said.

The 44-year-old Abrigana said she paid P30,000 for her house which had yet to be finished when the Probe team arrived.

Her house was one of the 50 structures that was demolished on orders of acting Mayor Margot Osmeña.

Claiming to be a Bando Osmeña-Pundok Kauswagan (BO-PK) supporter, Abrigana appealed to Osmeña to defer the demolition.

With her house taken down, she said she and her family will go home to Argao town in Cebu to build a house there.

Most of the settlers came from Barangays Lahug, Kamputhaw, Kalunasan and Mabolo.

They claimed that they were BO-PK supporters and voted for Mayor-elect Tomas Osmeña.

The settlers claimed that BO-PK candidates signed a “covenant for mutual support” which they showed to media supposedly containing the signatures of Mayor-elect Osmeña, his wife Margot and Rep. Rodrigo Abellanosa of Cebu City’s south district.

Sought for a comment, the acting mayor said she did not remember signing any covenant agreement during the campaign period.

“Tommy answered it very clearly before; it was a campaign issue. You can help by doing what is legal. It doesn’t mean that you can move in. We will have them do what is right. You can’t break the law; you live where is right,” she said.

The owners didn’t put up any resistance towards the Probe team who arrived in the area at 10 a.m. yesterday.

Probe team head Raquel Arce said she proceeded with the demolition after the settlers failed to present a temporary restraining order (TRO) or any injunction order.

“Nagpasalamat ta nga ni give way sila sa atong clearing ug nagmalinawn atong operasyon (We are thankful that they gave way to our clearing, and our operation is peaceful),” she said.

Benjie Eballena, President of the Association of Peoples Initiatives Homeowners, said they initially formed a human barricade to block the demolition but later relented since they have no legal order to stop it.

“Our pleas went unheeded. But we took videos in case something happens, we didn’t resist,” Eballena said.

He said they filed for motion for reconsideration at the Regional trial Court in Cities.

Read Next
Leni relaxes with family in Bohol, Cebu